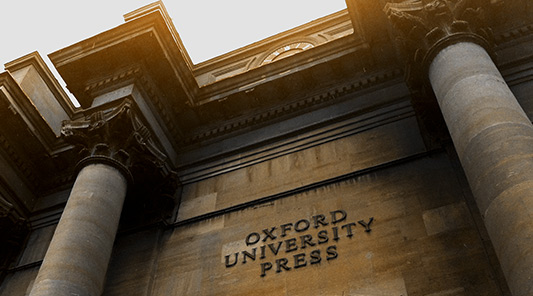 The great thing about the DXi6700 appliance is that it integrates seamlessly into our broad data protection environment, using deduplication to solve our backup challenges.

As the publisher of more than 6,000 titles a year in both print and digital format, Oxford University Press is the world’s largest university press. With its overloaded backup system nearing end-of-life, Oxford opted for Quantum’s disk-based deduplication for short-term retention and tape for long-term backup. The result: A 95 percent reduction in disk backup requirements, a four-fold increase in backup performance, and restores in half the time.

Oxford began to search for a better backup solution when it realized data growth was putting pressure on its previous system, resulting in unreliable backups, exposed data, and rising media and storage administration costs. In addition, both backups and restores were taking far too long. One database server took a full 36 hours to protect—unacceptable to Oxford.

“We were impressed by the 95 percent deduplication rate that the Quantum DXi® platform was delivering, the cost per terabyte was significantly lower [than a competitor's product], and, based on our earlier experience with other products, we believed that the Quantum support would be better, ” says David Weston, IT Infrastructure Manager for Oxford.

The DXi6700 Series appliance now receives all of Oxford’s daily backups, it deduplicates the data sets for reductions of up to 95 percent, and the system sends weekly copies of data to the tape library for off-site protection and long-term retention.

The new system solved all the key problems that Oxford needed to address. Backup speeds are now up to four times faster than the old system, so all the backups complete during the allotted window. This not only means that the backups no longer impinge on the active production schedules, but also that administrators no longer spend time troubleshooting jobs that failed because they ran out of time.

In addition, because of the DXi’s high deduplication rates, three months of backups are held on disk so virtually all the restores come from a local copy. Restores take less than half the time than the old system, giving users their files more quickly and freeing up administrators for other jobs.

Oxford University Press is the world’s largest university press with the widest global presence. The company has a diverse publishing program, producing content in many countries, in more than 40 languages, and in a variety of formats—print and digital. Oxford University Press’ products cover an extremely broad academic and educational spectrum, from pre-school to secondary level schoolchildren; students to academics; general readers to researchers; individuals to institutions.