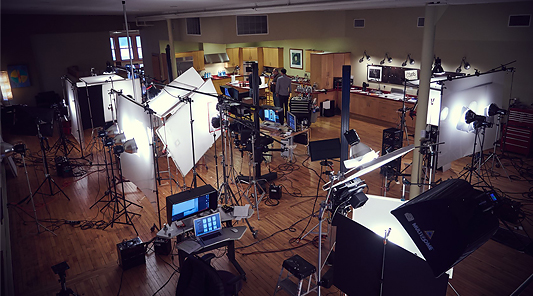 In the months since the system has been up and running, we haven’t had a single second of downtime.

Bruton Stroube Cuts Storage Demands Down To Size With StorNext

Bruton Stroube has been telling stories through compelling images for more than three decades. Initially focused on still photography, the company expanded into motion video in 2009. Today, Bruton Stroube offers a full range of visual solutions to support everything from ads and PSAs to short-form documentaries.

The IT team built the video workflow and storage systems from the ground up. Using Apple Mac systems with local storage arrays was sufficient for several years. However, the move toward high-resolution video required a change.

The team initially added an Apple Xsan server and expanded to about 20 TB of storage capacity. But, the relief it provided was short-lived. “[T]he camera technology pretty quickly outran what the system could do,” says McKenzie. “We went to the latest Red Epic-W cameras and started capturing everything in 6K or 8K—and we got swamped. Typical shoots were creating a couple of terabytes a day, and we needed way more space.”

The team wanted a new storage solution that could provide scalability, deliver high performance, and maintain compatibility with Xsan. The solution also had to be affordable.

The Quantum StorNext® shared storage and advanced data management solution was the company’s top choice. The solution is fully compatible with Xsan and all of the applications used by the Bruton Stroube creative team. StorNext also offers high-speed, shared Fibre Channel access for multiple editors plus seamless scalability—allowing systems to increase capacity and performance independently as demands change. Moreover, the Bruton Stroube team knew that the company could add storage tiers in the future, thanks to Quantum’s long-term commitment to the digital media market.

But, the affordable price point was unexpected. “We knew that StorNext was our first choice from a technical point of view,” says McKenzie, “but we were surprised when its cost was the same as other products that were much less powerful and less proven.”

The team ultimately selected a StorNext solution that integrates the Xcellis workflow storage platform, QXS Series hybrid storage arrays, and Scalar i3 tape library. “The StorNext solution we chose gives us everything we need today and includes lots of options for growth as our needs change,” says McKenzie.

The Bruton Stroube team was apprehensive about the transition. “I wanted to avoid interrupting the production team’s work, and didn’t want to spend weeks preparing for the change and then more weeks afterwards tuning it,” says McKenzie.

As it turned out, the switchover was very smooth. Over two to three days, a team from Quantum prepared the site, installed the new hardware, and set the groundwork. “Then, they told us to go to lunch and that it would be ready in an hour,” says McKenzie. “[W]hen we returned, it was perfect—we had magically added about 72 TB to our existing volume and everything worked exactly as it had before.”

Gaining Strong Reliability and a Path for the Future

The Bruton Stroube team is very satisfied with the new storage solution, especially its reliability. “The new StorNext system has given us everything we had hoped for,” says McKenzie. “In the months since the system has been up and running, we haven’t had a single second of downtime.”

The team is already planning to expand the StorNext environment. “We are considering moving all the work for the still images over to the StorNext SAN, and we want to add StorNext Storage Manager to the system to give us automated archiving,” says McKenzie. “We already have a Quantum LTO library and would like that to become an automated tier in the workflow.”

Bruton Stroube is an independent studio of creative collaborators who produce compelling imagery through still photography and motion video. Based in St. Louis, the team has worked with diverse clients—such as Anheuser-Busch, Carl’s Jr., Enterprise Rent-A-Car, Purina, and United Van Lines—for more than 30 years.