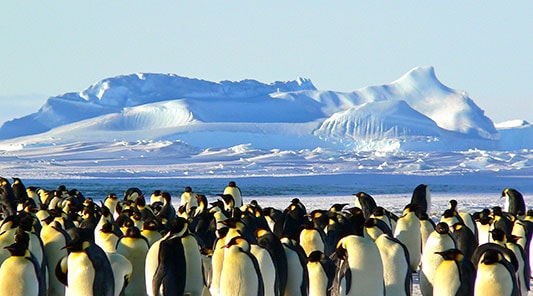 The Scalar i3 library allows us to have the library and server blade in one box. We can just plug it into the network and go from there.

The RRS Sir David Attenborough, named after the renowned naturalist, is a brand-new, custom-built ship commissioned by the UK’s Natural Environment Research Council (NERC). The ship is equipped with specialized laboratories and instruments to support cutting-edge scientific projects that study water properties, sea animals, the sea floor, the atmosphere, and more.

The BAS IT team was tasked with implementing all the necessary information technology for the ship’s research “cruises,” which last between six weeks and two months. Providing sufficient data storage and backup capacity was a top priority.

“As we planned for the new vessel, we estimated that researchers would produce roughly two orders of magnitude more data than on our previous vessel,” says Jeremy Robst, the IT support engineer in charge of Linux systems, data storage, and backup systems for BAS. “That might mean anywhere from 10 to 100 TB during a single research cruise. We had to supply storage and backup equipment that could handle that data.”

Protecting Large Data Volumes With Digital Tape
Tape libraries play a key role in safeguarding research data. After initially storing data on disk, the onboard ship team backs up data daily to tape. If there are any hardware issues with disk storage, the team can restore data from tape during the cruise.

Using tape also makes it easier to transport data back to the organization’s office in Cambridge, England. “With tape, we can store very large data volumes on compact media, and then simply put the tapes in our luggage when we head back to England,” says Robst.

Selecting Converged Quantum Scalar Tape Libraries
After considering tape solutions from multiple vendors, the IT team selected Quantum Scalar i3 tape libraries. The decision was partly based on the integrated, converged design of the Scalar i3. “The Scalar i3 library allows us to have the library and server blade in one box,” says Robst. “We can just plug it into the network and go from there.”

The IT team is installing two Scalar i3 libraries on the Sir David Attenborough. One library uses a Veeam Tape Server iBlade, which supports the Veeam software used for daily backups from disk storage. The other library uses a Scalar linear tape file system (LTFS) iBlade, which supports file-system operations. “With our dual-library setup, each Scalar i3 library can act as a spare for the other,” says Robst.

Gaining Compact Storage With LTO-8
Minimizing the storage footprint is vital on space-constrained research ships. By choosing Scalar i3 libraries equipped with LTO-8 drives, the IT group can store up to 12 TB of data per cartridge, or 30 TB compressed.

Making It Easy to Transport Data Back to England
The IT team can make copies of backed-up data using LTFS. Then, at the end of the research cruise, the team can simply pack up the copies and bring them back to the UK office. “We can easily put the tapes in the library and make data readily available to other researchers.”

Preparing for the Maiden Voyage
The coronavirus pandemic slowed the installation of the IT environment on the Sir David Attenborough, but the IT team is ready to put the new storage environment through its paces. Says Robst: “We’re hoping that by the end of the year, we’ll have taken the vessel to sea to really experience how these libraries can help assist with some important research.”

British Antarctic Survey (BAS) delivers and enables world-leading interdisciplinary research in the Earth’s polar regions. Skilled science and support staff produce research that increases our knowledge of the planet and advances our understanding of the processes, vulnerability, and risks that arise from natural and man-made phenomena.