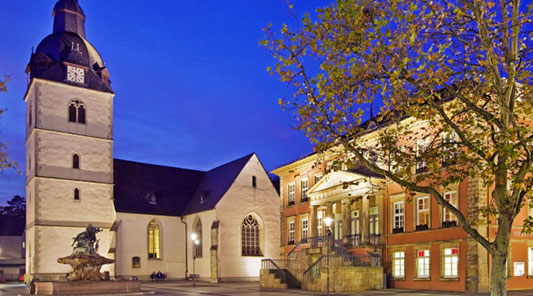 The combination of DXi deduplication appliances and Veeam is just ideal for us. Backup processes run reliably, and Veeam ensures that the VM servers are backed up every day, as required. We feel much more secure, one reason being that we now have a second copy of our data in Lemgo.

Tim Veers
Head of the IT department, District of Lippe
Download the case study

Initially, Lippe used backup software to deduplicate data from its 15 physical and more than 180 Virtual Machines (VMs), write it to disk and then to tape. But as data grew, backups and restores took too long and required too much administration.

Lippe worked with system integrator PMCS, and determined Quantum DXi® deduplication appliances as the best combination of scalability, price/performance, and effectiveness. Backups were written to a DXi in the central office every night, and every day replicated to a DXi at a second site. Backups were faster and restores became simple.

In 2013, the backup system took a step backward, when it came to VMs. Lippe’s IT department decided on new backup software by Veeam. “Suddenly backups were performed without any complications, obstacles, or errors. It was such a relief for our team,“ explains Tim Veers, head of the Lippe IT department. Since Veeam then only supported VMs, the team continued to use their legacy application for physical servers.

“We wrote backups for physical servers to one share of the DXi using a virtual tape library interface and our old software, and Veeam wrote VM backups to a CIFS share in the same DXi. We replicated all the data to the second unit for DR protection. That solution worked until we discovered Veeam Endpoint Backup, a new version of their product that can protect physical servers. So now we use Veeam and DXi for backing up everything.”

“The combination of DXi deduplication appliances and Veeam is just ideal for us. Backup processes run reliably, and Veeam ensures that the VM servers are backed up every day, as required. We feel much more secure, one reason being that we now have a second copy of our data in Lemgo,” Veers explains.

In 2014, expansion of services nearly doubled data volumes overnight. “The time after working hours was no longer enough to complete a full backup by the beginning of the next business day,” says Veers. The solution was adding another DXi, a new larger unit with higher capacity, throughput, and scalability.

Backups written to the new DXi finish well within the backup window, and each morning they are replicated to the other DXi in the main data center and to the remote site. Servers at the secondary site are backed up locally and copies are replicated to the main data center, so all the data has multiple copies in different sites every day. Weekly, a backup is written to a Scalar i500 tape library for long-term vaulting.

Veers is delighted by the interaction between the DXi appliances and the Veeam software: “The systems run soundly, we get good backup rates, and we can retain more backup sets thanks to the very high deduplication rates.”

“We have tried software-based replication, along with software-based deduplication, but it simply didn’t work very well. Replication was so slow that it could days to complete. With the DXi we see deduplication rates of 29 to 1, and even higher bandwidth savings, up to 136 to 1, so the entire replication process usually takes no more than 30 minutes. The streamlined backup and restore operation has benefits for the whole organization. Now that we don’t spend half our time restoring files, we have more time to work with other employees, and we provide them with much better technical support,” Veers reports.

About District of Lippe

The District of Lippe, with a heritage that dates back to the Holy Roman Empire, is an administrative district responsible for a wide range of services for ten cities, six municipalities and a substantial rural population in the State of North Rhine-Westphalia. The District, comparable to a county in the United States, is the primary governmental unit for its region, providing everything from election oversight and road maintenance to management of social services, youth programs, and health care.