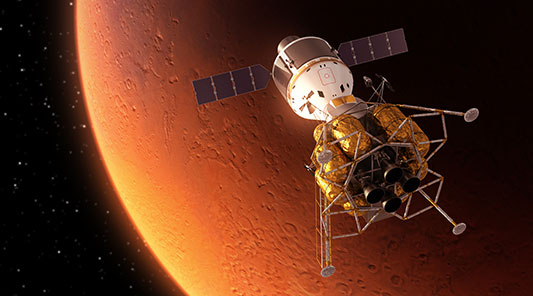 StorNext is designed to give everyone faster access to the data, to make content searches and retrieval quick and easy, and to reduce the amount of administration time. It’s a win on every count.

There are not very many imaging environments more challenging than the one that supports launches at NASA’s Kennedy Space Center. Imaging data, which include video taken at speeds of up to 1,000 frames per second, weigh in today at around 200TB per mission and must be available at multiple NASA centers as rapidly as possible.

The original imaging system started with tape or photographic film that had to be rushed out of state for development and digitization.

“It would take two days to get the film processed and available as a file, so the NASA team could analyze the high-res slow-motion footage,” explains Jeff Wolfe, Communications System Engineer at Abacus Technology, the NASA contractor for imaging services. “The asset management system we had at Kennedy could not handle the complete process because it was really more suited to documents than to video and image data. It meant that access to the image data was delayed.”

The still images and video files serve multiple purposes. Scientists use them to assess effectiveness of equipment, systems, and procedures. Security uses them as part of its surveillance procedures. And the public affairs department uses them to communicate the agency’s mission and provide images to the general public.

“The video footage we collect is an irreplaceable asset that must be protected and retained, as well as being made available to a wide range of different users at different locations, which makes the management task particularly challenging,” Wolfe says.

NASA had several key considerations for its new system. It had to download all data within 24 hours of a launch, and have an integrated asset management foundation. It needed to scale to support future needs, store and archive multiple copies of files, and give all users access to content. It needed compatibility with systems used in other offices, provide overall value, and be thoroughly tested prior to installation.

A key partner on the project was veteran workflow integrator StorExcel, the designer and supplier for the NASA solution.

With the new solution, cameras record the launch digitally, and download content to the StorNext QXS-1200 disk. On ingest, metadata is logged into the IPV media asset manager, and two copies are created in the archive. The disk copy is accessed by users while the files are active, and as content ages it is removed from disk but remains available in the archive. Files and metadata are visible through IPV for all content, whether they are on disk or in the archive. For additional security, one tape copy is retained off-line.

“With StorNext, video files get into the system at high speed. Everything is protected immediately so the data is safe and secure, and all the assets are available immediately to users using a single IPV management interface,” Wolfe says. “StorNext is designed to give everyone faster access to the data, to make content searches and retrieval quick and easy, and to reduce the amount of administration time. It’s a win on every count.”

A key to an efficient roll-out was system pre-staging. “Quantum gave us space in their Englewood Colorado facility to set up and configure the exact system that we would be installing so that we could perform the factory acceptance testing without interrupting any of the operations at Kennedy—it really worked well for us,” Wolfe says. “Since we had good test data from the system itself, when we saw performance differences at our site, it helped us identify issues that we needed to resolve.”

Founded in 1958, the National Aeronautics and Space Administration (NASA) leads the world in the science associated with aeronautics and space exploration in accordance with its mission to reach for new heights and reveal the unknown for the benefit of humankind. NASA conducts its work in four principal organizations, called mission directorates. Aeronautics manages research focused on meeting global demand for air mobility in ways that are more environmentally friendly and sustainable, while also embracing revolutionary technology from outside aviation. Human Exploration and Operations focuses on International Space Station operations, development of commercial spaceflight capabilities and human exploration beyond low-Earth orbit. Science explores the Earth, solar system and universe beyond; charts the best route of discovery; and reaps the benefits of Earth and space exploration for society. And Space Technology rapidly develops, innovates, demonstrates, and infuses revolutionary, high-payoff technologies that enable NASA’s future missions while providing economic benefit to the nation.