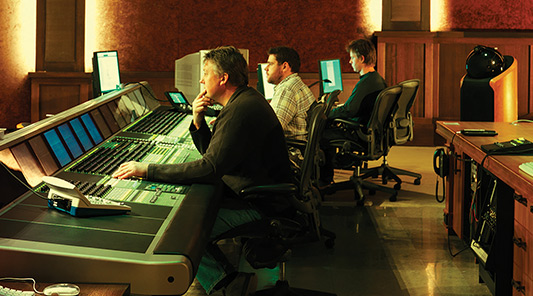 It was very important that software could be tailored to fit Park Road and not the other way around. StorNext exceeded our expectations by delivering on that requirement and more.

Editing Out Inefficiency To Handle 20TB A Day

Park Road Post Production, a premier facility for filmmakers located in New Zealand, has worked on some of the largest-budget Hollywood films, as well as independent and New Zealand features. It takes massive amounts of digital data to get to a finished product, so Park Road adopted StorNext software for data management. The result: Park Road stays on top of today’s demanding digital workflows and the growing amount of associated content.

The challenge that Park Road faced was scaling its systems to accommodate the rapid increase in data that digital filmmaking now generates. The traditional tools used to manage the content are often overwhelmed by the demands of data acquisition, collaboration, distribution, and archiving. Fast turnaround is a key factor in motion picture production, so Park Road’s ability to help filmmakers maximize their creative time is a significant competitive advantage.

“We realized that we would need to dramatically increase our throughput and capacity to meet the potential demand,” says Phil Oatley, Head of Technology for Park Road. “On one project, each shoot day would see us process an average of six to twelve terabytes of new material, and on a really busy day this could reach twenty terabytes. All new material needed to be processed and delivered to the client within twelve hours.”

In short, Park Road was faced with the prospect of “drowning in data.” The facility needed a solution with speed, efficiency, and scalability.

Park Road already was familiar with the effectiveness of Quantum technology, having used Quantum StorNext FX for non-Apple SAN clients and a Quantum Scalar tape library for archiving. At the recommendation of Park Road’s technology partner, Factorial, the facility decided to implement a larger Quantum solution composed of full-scale StorNext software and a Scalar i6000 enterprise tape library.

Park Road uses StorNext Storage Manager to automatically move data between high-performance disk and a large-capacity tape library archive. In addition, the Scalar i6000 provides a substantial increase in the amount of data that can be kept for near-term re-evaluation or processing as well as long-term archive.

After the integration was complete, performance increased substantially for Park Road. The system at Park Road routinely processes multiple terabytes of data in just a matter of hours and can handle in excess of 20TB per day at peak load.

Park Road Post Production is a premier post-production facility located in Wellington, New Zealand. Developed by filmmakers for filmmakers, Park Road offers a relaxing and inspiring environment for filmmakers to realize their vision. Park Road was established as a one-stop shop with a film laboratory on site sitting alongside the picture and sound departments. Park Road is uniquely placed to supply all post services for a feature from digital and film rushes, stereoscopic alignment, digital intermediate, foley and sound mixing through to the final completion of all film and digital deliverables for distribution. For more information, visit: http://www.parkroad.co.nz