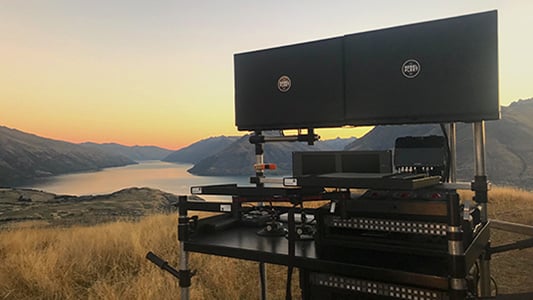 StorNext has changed the way we work. It provides the performance we need plus the flexibility to support a wide variety of creative tools and processes. With StorNext, we are completely unconstrained.

The Rebel Fleet was engaged on a live-action film project for a major Hollywood studio. Principle photography was set for New Zealand and China, with the production team planning to capture raw, high-resolution data on location.

To meet the studio’s expectations, The Rebel Fleet had to upgrade its storage. A new solution had to deliver the performance and collaborative capabilities required for onset processing of raw, high-resolution media. It also had to be dense, so it could be incorporated into a mobile rig that could be carted to remote locations.

Connecting with Factorial and choosing Quantum

Teams from The Rebel Fleet, Factorial, and Quantum worked together to rapidly assemble and deploy a mobile rig, which also used multiple Apple Mac Pro computers for ingesting data, calculating checksums, archiving to LTO tape, and color grading. The rig was ready within ten days.

High-performance storage based on the StorNext® file system helped significantly accelerate workflows. “With the Quantum solution, we were able to crank out 150 frames of footage per second in three different formats while also supporting real-time color grading,” says Michael Urban, founder and managing director of The Rebel Fleet. “Overall, this online environment delivered 6 GB per second of throughput. It was very impressive, and it helped us meet tight turnaround times.”

Seamlessly Scaling—in the Middle of Nowhere

The StorNext platform enabled the Factorial team to scale the ingest volume—doubling its size from 200 to 400 TB—without interrupting the shooting schedule. In the middle of the production, the Factorial team was able to expand the system in a remote location, with previously ingested data still residing in the environment. “StorNext performed in the real-world exactly as was advertised, and truly let us scale the system seamlessly,” says Tim Benson, director and technology evangelist at Factorial. “The Rebel Fleet team and the film production crew were very happy.”

The Quantum storage systems offered the capacity for a large volume of high-resolution footage in a very dense environment. “In all, the environment processed nearly 900 TB over the course of the shoot,” says Benson. “And we managed to provide all that capacity in a rig that was the size of a deep refrigerator.”

The rig’s mobility enabled The Rebel Fleet team to set up temporary on-location review environments in very remote locations. The director, director of photography, and others could review footage, and evaluate color grades and lighting, just minutes after calling “cut.” That immediate feedback allowed the production team to make critical creative decisions and maximize on-set productivity.

About The Rebel Fleet

Based in Wellington, New Zealand, Factorial has deep expertise designing broadcast and post-production workflows — from small creative workgroups all the way to the largest post-production pipelines on the planet. The company has a customer-centric philosophy – starting by understanding how a customer works, and then identifies opportunities to simplify complex tasks, and improve productivity. Factorial can solve even the most complex integration challenges using our toolbox of technology building blocks.