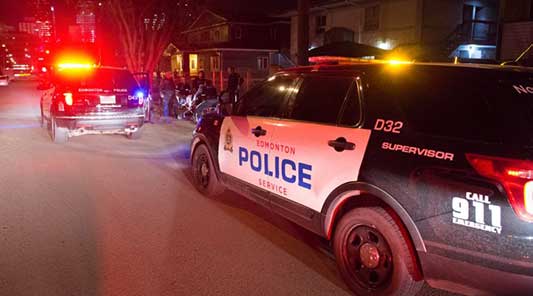 We looked for a robust media asset management system that could help us store, manage, and access our video assets… and scale to support our future growth. We’re very glad we chose CatDV from Square Box Systems, and it has exceeded all our expectations.

As the municipal police force for the city of Edmonton, Alberta, Canada, the Edmonton Police Service (EPS) employs almost 1,800 sworn officers and an additional 700 civilian staff, operating out of 15 stations throughout the city. With such a large workforce, effective training and consistent communications are a top priority – and that’s where the EPS digital media unit comes in. In addition to managing the department’s website and social media presence, the digital media team produces many terabytes of video content every year, the majority of which is used internally for officer and employee training.

“We are primarily a video production unit, with a minimal crew to produce and manage high volumes of output,” said Bob Allman, head of the digital media unit at the Edmonton Police Service. “When we migrated to HD production and a fully digital production workflow almost seven years ago, we looked for a robust media asset management system that could help us store, manage, and access our video assets. It was also important that the system scale to support our future growth. We’re very glad we chose CatDV from Square Box Systems, and it has exceeded all our expectations.”

A Smooth and Seamless Media Workflow
To date, EPS has stored upwards of 190,000 video clips in CatDV using a smooth and seamless workflow for ingest, categorizing and tagging, and archiving. Assets are primarily video footage for internal training, but also include video for public outreach campaigns and a large volume of still photos.

Once video footage is ingested, the CatDV Worker Node takes over. Based on predefined workflows, the Worker Node saves the clip to the appropriate folder and assigns a tag if the clip needs access control to protect sensitive information, for instance, a training video on police tactics. Worker Node then copies the raw camera footage, or still, to the main SNS EVO 16 bay 96TB Shared Storage system and simultaneously backs up the content to another SNS EVO 96TB near-line storage system, and then lastly archives to the MLogic M-Tape LTO7 Thunderbolt offline tape archive system with Imagine’s Pre-Roll Post Software. For large files, Worker Node can automatically create a low-resolution proxy for user access and review, preserving system resources by enabling sharing of the proxy rather than the full-resolution file.

“Worker Node makes my job so much easier and saves me tremendous time. I just ingest the footage and click a button in the CatDV interface, and Worker Node handles the rest,” said Pauline Lancaster, who manages the ingest of assets into CatDV. “We realized right from the beginning how much more efficient we could be with CatDV, but it’s especially valuable now that we’ve begun to work with 4K and very large files. I can start ingesting the file and then go home for the evening, and then when I come in the next morning, Worker Node has backed it up and put it in the media pool, ready for me to catalog it in CatDV the next morning.”

She adds that CatDV’s customizable interface has allowed the digital media team to adapt the system over the years as its needs have evolved. “As our organization grows and requirements change, we’re flagging types of content that might not have even existed a few years ago. CatDV’s onscreen customization makes it very easy to adapt the system to our workflows.”

Near-Instant Access to a Vast Content Collection
“The seamless integration of CatDV with the storage system means we can always find the content we need, without having to worry about where it lives and without ever having to leave the CatDV interface,” said David Benson, a producer with the EPS digital media unit. “I can select the clips I need and then send them directly to my project.”

CatDV’s ability to handle large volumes of content and scale with the organization is particularly valuable to EPS, all enabled by its metadata handling capabilities. CatDV supports unlimited metadata from any type of camera, including still cameras. “Everything in the digital media world today is metadata-based,” Bensen said. “We can ingest anything, even digitally shot still photos, and then CatDV can catalog it with a wide variety of metadata fields for easy grouping of files and later access. We’re only limited by storage, and we’ve made sure to equip ourselves with plenty of that, together with the fastest and most current Mac computers available. It means we can be ‘hoarders’ of content.”

This vast collection of content, together with CatDV’s easy search and retrieval capabilities, came in handy in 2016 when EPS celebrated its 125th anniversary. “We had a lot of requests for historical footage and photos that other departments wanted to use to commemorate the event, and we were able to meet everyone’s needs quickly and easily,” Benson said. “We expect we’ll still be using CatDV when the 150th celebration comes around!”