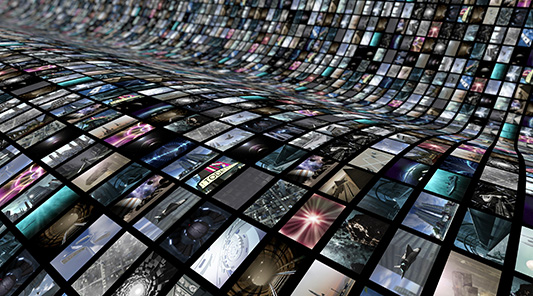 On a daily basis, the speed enabled by this new edit workflow makes it possible for MNCTV, RCTI TV, and Global TV to get content to air more quickly.

The MNC group owns and operates three television stations that together hold the highest free-broadcast market share in Indonesia. Recently, the company’s IT and production teams decided to carry out a major system upgrade, driven by several different factors, including the demands created by high-definition formats.

At the same time, the teams decided to consolidate all editing and post-production operations into a single, 120-seat system to facilitate sharing and getting content on the air more quickly. Using a single system meant providing support for all the different platforms and formats in use, including both Macs and PCs. The new solution would also have to be compatible with the company’s existing Brocade storage area network (SAN) and Xsan file system, and leverage its existing tape libraries for archiving. Ideally, they also wanted a system that would allow them to write their own Media Asset Management (MAM) tool.

The MNC team compared different solutions based on several factors, including how well they met the overall requirements, how easily they could scale in the future, the level of technical support available locally, and overall cost. The final selection was a combination of Quantum’s StorNext software and QXS-1200 RAID arrays operating in conjunction with MXFserver software.

StorNext software provides a high performance, SAN-based workflow that allows all the editors to collaborate easily, even allowing multiple editors to work on the same files at the same time. StorNext also provides an integrated, open-system archiving function that automatically moves files from active disk to tape using the company’s legacy libraries. Content in the archive is viewed through the same interface as active work, making it easy to use existing content for new programming. The high-speed QXS RAID arrays support a large number of parallel streams, making it easy for the system to carry out multiple operations at the same time. StorNext also provides a well-defined API, which will allow the MNC Group to create its own MAM.

During the selection process, the IT team placed a premium on finding an open-system approach that would provide maximum flexibility in the future. StorNext allows users to scale capacity and performance independently, is fully compatible with Xsan, supports different archive libraries, and works with the MXFserver file management system. The StorNext system is also used worldwide and has a global service team to support its customers.

After several months in operation, the new StorNext-based workflow system has reduced the time required to prepare content, saved money by using its existing libraries to archive, and the team can begin creating its own MAM using the StorNext API.

“Quantum and the MXFserver team worked closely to understand our needs, design and test this system, and ultimately ensure that we could successfully establish efficient media sharing across all our edit systems,” says Kuswandi Aslan, head of Integrated IT Broadcast, MNC Media. “On a daily basis, the speed enabled by this new edit workflow makes it possible for MNCTV, RCTI TV, and Global TV to get content to air more quickly.”

“As we look ahead to the future of post-production for MNC Group stations, we appreciate that we can scale our StorNext system very simply and easily as our operations demand,” adds Aslan. “In the meantime, we plan to leverage this new storage infrastructure to facilitate the migration of our extensive SD content library to an HD format.”

The MNC Group, founded in 1997 by Hary Tanoesoedibjo, is the largest supplier of free-to-air broadcast in Indonesia, supplying general entertainment and news throughout the nation on its three television stations: RCTI, Global TV, and MNCTV. RCTI was the nation’s first independent television outlet, beginning its broadcasts in 1989. Beginning as an educational channel in 1991, today MNCTV provides a full range of news and entertainment content and broadcasts throughout the county. Global TV has been airing news and sports since 2002, along with international content, including MTV and Nickelodeon programs.