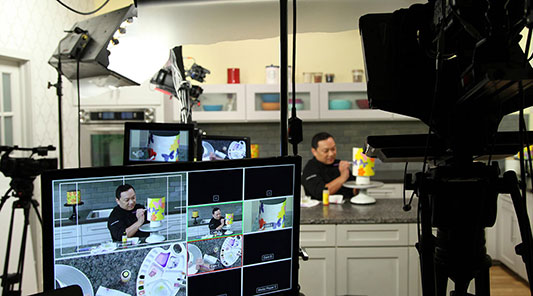 StorNext gives us the performance to do multicam editing efficiently. Production teams can stay focused on set, we have greater flexibility for editing, and the entire workflow is faster.

In only six years, Craftsy has become a premier meeting place for thousands of creative pros and millions of makers, producing more than 1,200 video classes on topics ranging from sewing and baking to photography and jewelry making. The classes feature how-to lessons, enable direct online interaction with instructors and other students, and are supported by downloadable templates, supplies, and complete kits.

Craftsy initially used an iSCSI-based storage area network (SAN) for video files, but outgrew it within two years. “I had to continuously move files around to free capacity—it was a huge pain,” says Justin Lang, development engineer at Craftsy.

It also didn’t have the performance to support multi-camera editing. “Multi-cam editing requires strong storage performance because editors need to play those multi-angle video streams simultaneously when editing,” explains Lang. “We needed a system that could deliver better performance, so we could produce high-quality videos, faster.”

Reliability was also a concern. “Every night, we export about 15 videos,” says Lang. “With the SAN, we had one or two failures per night, which slowed our workflow. The SAN just didn’t have the performance needed to export files reliably.” And there was often down-time.

The new system streamlined file access. “Editors can easily grab a project file from within Adobe Premiere Pro,” says Lang. “With the MAM and a single StorNext file system, it doesn’t matter where the original files reside. Editors don’t have to manage footage, and administrators avoid the headaches of trying to find files.”

When it was time to upgrade, Craftsy selected a Quantum StorNext M440 Metadata Appliance, which uses the StorNext 5 platform to manage data, adding it and StorNext Q-Series Storage to its SAN. Quantum and one of its integrators helped create a smooth deployment. “We prepared the environment during the day and did the cutover at night,” says Lang. “Downtime was less than a day.”

StorNext has streamlined the production workflow. “Once editors begin the ingest process, data is transferred to the SAN, then the MAM picks it up for ingest,” says Lang. “Ultimately, all of the raw content resides in the StorNext environment—that’s where our entire repository of assets lives until it’s time for archiving. With StorNext, multiple users can simultaneously access the assets they need.”

“The StorNext SAN delivers significantly better performance than our iSCSI SAN,” says Lang. “Video exports are much faster. As a result, producers can start reviewing footage and providing feedback to editors more rapidly than before.”

StorNext also enables multi-camera editing. “StorNext gives us the performance to do multi-cam editing efficiently,” says Lang. “Production teams can stay focused on set, we have greater flexibility for editing, and the entire workflow is faster.”

StorNext has also essentially eliminated export failures. “With the StorNext solution, export failures have gone from one or two per night to zero,” says Lang. “Our editors can concentrate on the creative process instead of technical issues.” And the IT group has also been impressed with the system’s stability.

“Now that we’ve implemented our StorNext solution, I don’t have to worry about scaling,” says Lang. “Whenever we need to increase our production output, I can just add disk capacity, and the system scales seamlessly. As a company, Craftsy can continue to produce more videos, offer more classes, and support an expanding community of makers without requiring a major overhaul of our storage environment.”

Founded by technical entrepreneurs in 2010, Craftsy is an online destination for “makers” who love what they do. More than a million curious and creative members visit Craftsy every week for ideas and inspiration in everything from knitting and quilting to photography and cake decorating. The Craftsy community also includes thousands of creative professionals who share their expertise as instructors, pattern designers, and contributing editors.