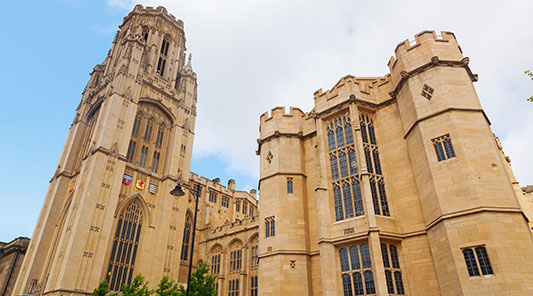 The DXi appliances offered us good initial pricing, the highest backup and restore performance we saw, and a great system of scalability. It allows us to add both performance and capacity in increments by purchasing additional controllers and disk trays when we need them.

Protecting the University of Bristol’s data means backing up hundreds of physical and virtual servers, and meeting stringent service level agreements (SLAs) for restore. For years, the team has relied on disk backup for “critical” data—with a short restore SLA—keeping it for 30 days on Data Domain deduplication appliances.

However, when they needed to increase capacity—from around 10TB to more than 100TB—they hit a wall. The backup and restore performance was not fast enough — and to cover their new needs they would have to make an initial purchase big enough to cover years of growth because the system had limited scalability.

“Being forced to buy lots of disk capacity now to accommodate future growth is something that doesn’t work for us because we are always trying to operate within somewhat unpredictable yearly budgets,” explains Graeme Cappi, Head of Systems and Operations at the University of Bristol. “So being forced to buy a big unit at the start—and later having to do a forklift upgrade—was a nonstarter.”

The team looked at other alternatives, engaging reseller Q Associates to help.

To make sure they found the right technology, they set up proof-of-concept tests for two alternatives: Quantum’s DXi appliances, which scale by adding controllers and disk arrays separately; and products from a relatively new competitor that scales to large capacities by linking multiple appliances together.

Using NAS, both were faster than the Data Domain’s 120 to 150MB/sec performance, but the team needed more. “After tweaking the systems, the DXi gave us about 265MB/sec in NAS mode—the ExaGrid unit topped out at about 180MB/sec,” Cappi reports. “Then the Quantum team suggested that we write some of the larger jobs to the device using a virtual tape library interface. The speeds were dramatically faster—we quickly got to 300MB/sec—and NetWorker worked perfectly with the devices both in the VTL and NAS presentations.”

So the decision was made. “The DXi appliances offered us good initial pricing, the highest backup and restore performance we saw, and a great system of scalability. It allows us to add both performance and capacity in increments by purchasing additional controllers and disk trays when we need them. We also have complete confidence in Quantum and Q Associates to provide enterprise-level support.”

The new system protects nearly 150TB of critical primary data each week using two pairs of replicating DXi appliances: one for the University’s institutional data, the second for data from individual departments. Backups are first written to the primary DXi using a VTL, NFS, or CIFS interface, and then replicated to a second site.

“The backups all complete within our window, and we replicate the backups every day,” Cappi says. “The lag is only about 30 minutes from the end of a backup to having a full replica at the second site, so we always have two copies of the files on disk within minutes. And restores from the DXi are very fast. They happen almost immediately, and we have no trouble at all meeting our same-day recovery SLAs for all the critical data.”

Service has been exemplary. “A few weeks ago, we reported an issue with replication and raised a ticket on a Friday afternoon,” says Cappi. “When the IT administrator came in on Monday morning expecting to spend time on the phone with the service team, he learned that Quantum had already fixed the problem over the weekend—replication was up and working normally.”

About University of Bristol

With a history dating back to 1876, the University of Bristol is one of the world’s leading institutions of higher learning, providing graduate and undergraduate education for approximately 20,000 students as well as internationally significant research in a broad range of the arts and sciences. The faculty and research teams associated with the University include 42 Fellows of the Royal Society, 15 Fellows of the British Academy, and 12 Nobel Laureates. In 2015, the QS World University Rankings placed Bristol among the top 40 universities in its global ratings survey.