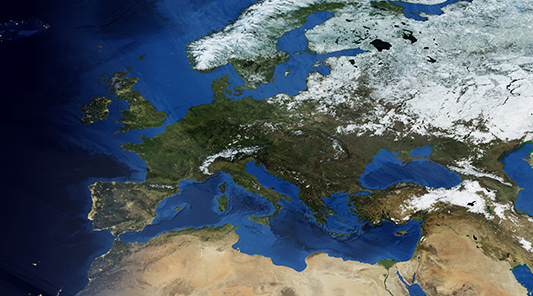 With StorNext, we knew we could meet our immediate need to store 400 TB of satellite data while gaining the ability to expand to several petabytes over the next decade.

ACRI-ST enables researchers worldwide to draw from more than 20 years of information, and it offers data processing services to help streamline research. “Beginning with raw satellite data would be very time-consuming for researchers,” says Gilbert Barrot, CIO of ACRI-ST. “They would need to sort through a huge number of large images before conducting analysis.” Instead, ACRI-ST servers process the raw images for a region of interest and directly deliver the data that the researchers need.

To prepare for a new ESA satellite, Sentinel-3, the ACRI-ST team needed a new storage environment—one that could handle petabytes of data, not the tens of terabytes typical of earlier projects. “We needed a solution that would accommodate our immediate needs and would scale—cost-effectively—as we collected more and more satellite data,” says Barrot. At the same time, the ACRI-ST team had to ensure that data was readily accessible for in-house scientists and external researchers.

Deploying StorNext for Speed and Scalability

The ACRI-ST team selected a Quantum StorNext tiered storage solution to archive satellite data, enable access for researchers, and support the ACRI-ST value-added workflows. StorNext offers a tiered environment that provides an optimal combination of scale and high-speed access, and it supports both Linux and Windows environments.

“The mix of tape and disk in a single environment gives us the best of both worlds,” says Barrot. “We can keep a cache of data immediately available on disk while storing most of the repository on more economical tape. With StorNext, we knew we could meet our immediate need to store 400 TB of satellite data while gaining the ability to expand to several petabytes over the next decade.”

ACRI-ST is already capitalizing on the StorNext platform’s scalability. In 2016, the organization won a bid to support ESA’s Earth Observation Data Archiving Service (EODAS), which archives all satellite data for past and current ESA missions (except the Sentinel satellites). ACRI-ST needed to provide 6 PB for historical data plus 2 PB for live missions.

To meet the new requirements, the ACRI-ST team expanded its Quantum archive. “ESA wanted a robust archive that could provide bulk data retrieval and distribution. The Quantum archive solution was perfect,” says Barrot. “We added capacity easily and inexpensively while still maintaining a small data-center footprint.” ACRI-ST also built a nearly identical environment in Luxembourg, through its subsidiary adwaïsEO, to serve as the main archive. Data is ingested in Luxembourg and copies are shipped to the French site for off-site protection.

The ACRI-ST archive takes advantage of the StorNext Active Vault capability to fully automate media handling, and data on the tapes are protected by the archive’s Extended Data Life Management (EDLM) capabilities. EDLM detects early signs of media wear and automatically moves files to new tapes to preserve them over long periods of time. The archive’s support of the Linear Tape File System (LTFS) allows researchers to read data directly without requiring that they use Quantum solutions, and its support for the cloud provides flexible choices for the future.

ACRI-ST specializes in remote sensing and modeling of physical and environmental phenomena. The organization offers solutions for satellite mission simulations and environmental forecast prototyping, provides decision-making support to public agencies and local authorities, and operates environmental data centers. ACRI-ST activities extend to spatial observation techniques beyond the ocean and land, including the development and industrialization of data processing chains, the design of data fusion and assimilation schemes, as well as the design and operation of data distribution systems.