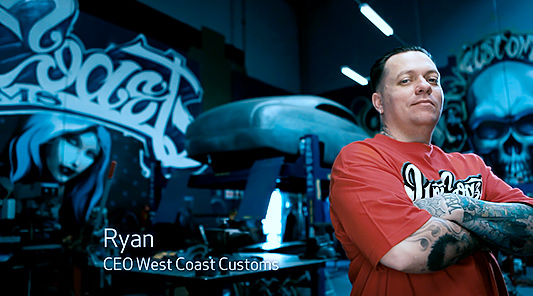 For me, the nicest thing about StorNext is that I don’t have to deal with it. Once it is set up, then everything just works everything just runs the way it should. When an editor turns on a workstation, I need it to work and work smoothly and that is what StorNext excels at.

Even though the goal at West Coast Customs is to do everything in-house—from body work to interiors to painting to filming the shows—the post-production process was handled by external production.

Once the film was shipped off to facilities for post-production, the team at West Coast Customs no longer had access to the raw footage. This was particularly frustrating when the team had to address the needs of sponsors, create promotional clips, and deal with product placements. Everything took more time. The solution, West Coast Customs decided, was to bring the post-production process in-house. However, that required building a post-production infrastructure from scratch.

Past Connections Made Choice Easy

West Coast Customs already had an established relationship with Hewlett Packard when they went looking for the best solutions for creating a post-production operation.

Combining the latest “incredibly fast” HP workstations with HP servers for storage just seemed to make sense. They also wanted to use Avid Technology as the editing platform but were less enthusiastic about the large investment required to use the company’s ISIS storage system for file sharing. Instead, the company turned to Quantum’s StorNext®—“a setup that makes Avid do what it does best: allow a tapeless workflow between computers,” said Kara Stephens, Producer at West Coast Customs.

The benefits to West Coast Customs are obvious—Stephens has no doubt that creativity, collaboration, and timely performance have all increased.

“We have the ease of having everything in one spot and any workstation can access that data,” she says. “So much of the footage overlaps from job to job that I can’t really say how much time it saves, but if we didn’t have HP and StorNext, we would be shuttling footage back and forth and uploading and downloading all of the time.”

In the past, it was particularly problematic when a hard drive used as a shuttle would fail, particularly if there were no backups for the footage. And as the hard drives aged, the whole process became slower and slower. Now with the full HP/Quantum solution installed, footage can be ingested once, backed up on the tape system, and be ready for shared access. Stephens offers an example of why shared access is critical:

“We are doing several separate builds right now—three separate documentaries for the same episode, five teasers, and two commercials that will all use the same footage,” she explains. “We can have different assistants and editors pulling from the entire pool of footage to do one project and then another. We definitely have to have ‘shareability’ and StorNext gives us that.”

Stephens adds that the reliability and ease of use of StorNext are particularly important.

West Coast Customs has grown into one of the most powerful and recognized brand names in the custom automotive industry. The company has franchises stretching across the world and a range of ventures across various media platforms. A household name in multiple countries through several reality TV shows, the company plans to continue growing and dominating the custom car world and expanding its global reach with amazing rides
and concepts.