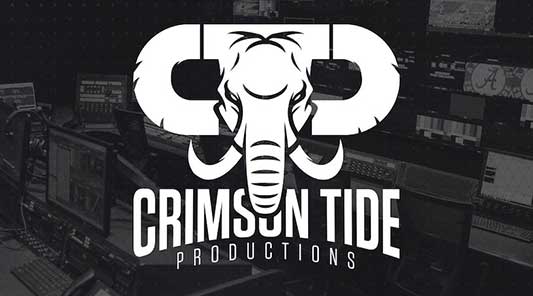 CatDV integrates seamlessly with our existing applications. It’s made the transition so much easier. We’re able to catalog old footage (approximately 10 TB), yet not disrupt our existing system. It is a great solution.

At the hub of one of the busiest and most illustrious college athletic departments in the country is the University of Alabama’s Crimson Tide Productions (CTP). Home to BCS championship Crimson Tide football team, CTP is responsible for producing the live video production and highlight videos for 15 different athletic programs including football, basketball, gymnastic, tennis, golf, volleyball, soccer, swimming, diving, and more.

CTP plays a crucial role in preserving and promoting the Crimson Tide brand. In addition to video content, CTP is tasked with creation of the athletic department’s graphical elements, web content for its website, RollTide.com and live streaming for their subscription web service, TideTV.

When CTP was looking to simplify their archiving system to manage an ever-growing high volume of footage, CatDV media asset management tool delivered the solution they needed.

CatDV was built into CTP’s production infrastructure with the “The Nick Saban Show” in mind. The 30-minute highlight show with championship Alabama football coach Nick Saban, is ready to air live on TideTV the day after each game. The game footage is cut that night, closed captions are done in the morning and it's off to air. The short turnaround time and need for a quick process on ingest required a custom asset management application able to handle the high demands of this highly popular show.

“We went down the path of a folder structure, and had a rigid system,” explained CTP Broadcast Engineer, Brennen Carlson. “But we’ve simply outgrown that structure. It was fine with certain productions but with a live broadcast event such as the National Signing Day, The Nick Saban Show, or many other shows, we may need to bring specific footage of a player during the season or broadcast up right away. We needed a solution that would integrate easily into our existing system and allow us to tag everyone in our database. CatDV was the best choice for us.”

CTP’s production studio is an all-digital workflow, no tape. They made the transition from tape to digital approximately two years ago. 25 workstations are connected to a SAN server hosting over 100 TB of storage. Bringing CatDV into their pipeline was essential. CatDV provides for a searchable archive of previously used clips; converting CTP’s vast library of existing assets into an efficient database ready to handle the demands of Alabama’s hectic athletic department schedule.

CTP’s production team is made up of eight full-time staff members and 30-50 student interns throughout the year assisting in post-production as well as live shoots. Currently, CTP’s studio uses only two workstations for ingest. As more files are added to the systems, maintaining consistent workflow practices among multiple team members is a challenge. CatDV allows files to be retrieved quickly, creating a gateway for everyone to access the footage. Additionally, CatDV provides a quick and easy archiving method freeing up storage for their new projects.

“CatDV integrates seamlessly with our existing applications” stated Carlson. “It’s made the transition so much easier. We’re able to catalog old footage (approximately 10 TB of footage so far), yet not disrupt our existing system. It is a great solution.”

Another significant benefit of CatDV for CTP has been the ability to set permissions. This enables CTP to control access to sensitive footage using CatDV to customize their specific security requirements. An integral part of the transition process was the customization and installation support implemented by JB&A, CatDV master distributor for North America. JB&A’s team evaluated CTP’s current and future workflow needs, then designed a training program to help the CTP team learn how to customize CatDV, not only for the initial install, but for future needs as the production workflow and volume of content continues to grow.

Crimson Tide Productions is an example of the high standard of excellence the University of Alabama athletic department has displayed throughout its long, prestigious history. Choosing the right solutions to enhance the production workflow for an already successful brand is not taken lightly. “CTP bet on CatDV as the asset management application to help us improve our efficiency,” remarked Carlson. “It’s proving to be a winning choice.”

For more information, visit the Crimson Tide Productions and the University of Alabama websites.