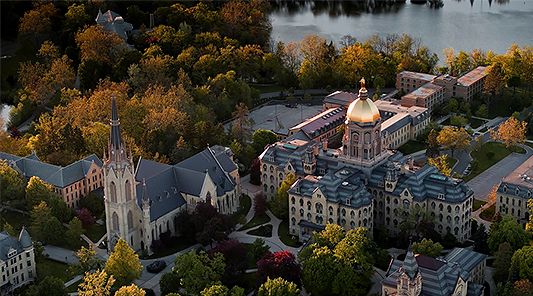 The StorNext / Vantage workflow reduced the time needed to post content dramatically—projects that could take hours to complete were out and to the fans in minutes.

The University of Notre Dame’s Fighting Irish Media (FIM) tells the Notre Dame story through the lens of athletics. Besides streaming 125-130 events a year, posting 1,200-1,300 highlights, and creating TV shows and features, the award-winning FIM team supports the university’s mission by supplying technical support whenever needed.

Keeping Up With the Pace of Fan Expectations

FIM knew their audience wanted to see event highlights as close to real time as possible—within minutes of a game’s end—but the infrastructure to meet that goal was not in place. Looking for help from an experienced expert, the team added Lead Technologist Scott Rinehart, who had handled media for the PGA TOUR Productions and NASCAR Media Group.

“Previously, the team sent cameras out to events, brought the footage back, copied to removable drives, and then had to edit, transcode, and distribute via their laptops,” says Rinehart. “The delay from the end of an event to posting highlights was typically hours… way too slow for our audience.”

FIM decided to upgrade their system to support a more up-to-date workflow to help them deliver content to viewers within minutes of an event.

FIM’s solution was based on Quantum’s StorNext® file-sharing software, delivered by OEM partner Active Storage. The new system created a shared environment where multiple editors could work on the same footage at the same time, and bring content from live feeds into the workspace while events were under way. The collaborative environment allowed all editors to share content—and most importantly, let them work on projects while images were being ingested.

“The results were dramatic,” explains Rinehart. “The StorNext/Vantage workflow reduced the time needed to post content dramatically—projects that could take hours to complete were out and to the fans in minutes. That meant that people attending a game could watch highlights on their smartphones while they were walking to their cars.”

The new system also increased the FIM team’s productivity. The team was able to produce 1,500 videos per year—50% more than the old system.

However, all of the good results seemed in jeopardy when Active Storage transitioned to a different business model and no longer offered the product the team had started using.

To help make the transition to Quantum-branded StorNext, the team brought on board Chesapeake Systems, an integrator that specializes in media and entertainment projects.

“The transition … turned out incredibly well,” says Rinehart. “We used the same ActiveSAN controllers, updated the software to full StorNext, and rolled the system over using a failover technique. There was no downtime and all of the applications….kept functioning seamlessly, as did the asset manager, CatDV.”

Supporting the Educational Mission of the University

“Our purpose is more than the world of athletics,” explains Rinehart. “FIM is now involved with creating content for MOOC (Massive Open Online Course) learning opportunities as well as opportunities such as supporting live shots with academic experts, along with monthly web streaming for the university’s alumni department.”

“We see ourselves as a bit of a lab….a place where other departments who have heard what we are doing on the video side and want to check out our tools to see if they could take advantage,” says Rinehart.