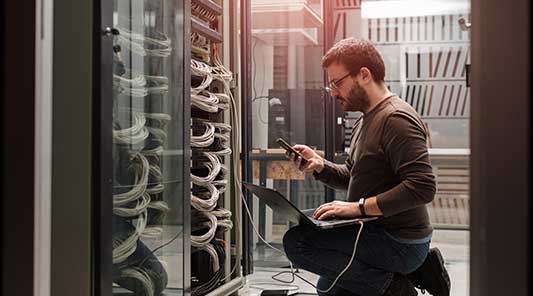 Installing ActiveScale was easy. We pulled each system out of the box, racked it up, and in a half hour, it was finished.

Until recently, the Commvault MediaAgents were connected to direct-attached storage, but the Boreus team needed to make a change as the direct-attached storage systems reached their capacity limits. “It was taking longer to complete backups and restores,” Thomas Sobirei, storage and data protection engineer at Boreus. “We needed a scalable solution that could speed up those processes.”

Simplifying management was another key goal. “Managing direct-attached storage systems with multiple file systems was too complicated,” says Sobirei. “We wanted to simplify management of our backup storage so our team could focus on other tasks.”

Discovering the Advantages of Object Storage
When examining both network-attached storage (NAS) solutions and object storage, the Boreus team found some important differences. “Object storage is much more cost-effective than NAS,” says Sobirei. “For example, ActiveScale was about 25% less than competing NAS solutions.” Object storage systems also offered simpler management. “We knew that the right object storage solution would be much easier than NAS to integrate with the Commvault system,” says Sobirei.

Selecting ActiveScale Object Storage for Backup Services
As the Boreus team explored new solutions, Quantum ActiveScale stood out among the pack. “We evaluated several object storage solutions, but Quantum ActiveScale was the only one that offered replication to S3 storage systems like AWS,” says Sobirei. “That capability provides us with the flexibility to support S3-enabled apps and workflows.” Straightforward implementation was another advantage. Installation took only a half hour. “It was very simple to get it up and running,” says Sobirei.

Simplifying Ongoing Backup Infrastructure Management
ActiveScale has dramatically simplified backup storage administration, eliminating the complexity of the previous environment. “We spend zero time managing ActiveScale,” says Sobirei. “We installed it, created S3 buckets, presented those buckets to Commvault, and that was it. There’s really no management needed with ActiveScale—and that’s what we wanted.”