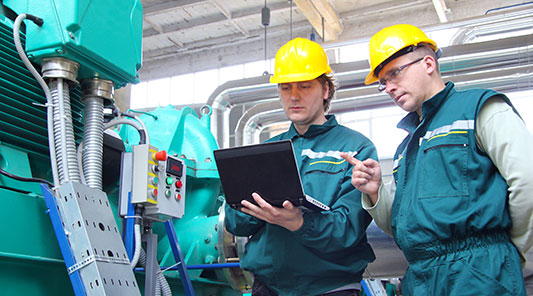 It’s a triple win for EMIS. We benefit from both SEP sesam and Quantum technology— and the two systems benefit from being used together. It’s the perfect solution!

EMIS Electrics is a small, innovative business that has grown from a 27-person firm two decades ago into an international business with more than 460 employees at eight locations. EMIS realized that it could not succeed without a streamlined backup system—a difficult challenge with data distributed across several locations.

Finding a deduplication appliance that would work with the company’s Linux- and Novell based server environment and its heavily virtualized infrastructure was not an easy task. “We tested a number of solutions from various providers—none of them offered the deduplication and compression performance that we were looking for. We were under serious pressure because we could no longer maintain our minimum retention periods of 90 days,” explains Karsten Hollop, head of IT at EMIS Electrics.

The DXi V1000 offers deduplication on a VM, and it keeps backup copies locally, but can also store them in the cloud or replicate to a second DXi appliance. Hollop installed a trial DXi V1000 on an ESX server, and connected it via Network File System (NFS) to the backup server.

“Before, our situation was catastrophic—we didn’t have a way of retaining backups anymore. The DXi trial was well worth the effort. Our previous solution couldn’t handle variable block lengths, so we had no deduplication at all. With the DXi, we rapidly achieved a reduction rate of up to 9:1—without making any changes to our backup strategy,” says Hollop.

After having success with the DXi V1000, Hollop took advantage of Quantum’s try-and-buyprogram to test a physical DXi appliance. After this trial was successful, EMIS not only implemented the DXi permanently, but also purchased a Quantum Scalar i40 tape library to provide long-term disaster recovery (DR) protection.

With the new system, incremental backups only take about 6 1/2 hours. For the full backups, the Novell backup servers transmit their repositories to the data center at Lübbenau using Linux rsync, so that data is also included. In this initial stage, EMIS retains backups for 90 days, but in future plans to move tapes off-site for longer term retention.

“Without the DXi reduction rate, we would need 41.36TB to store the backup volume. Now, we use only 5.2TB of disk space. That’s quite a remarkable difference,” says Hollop. Integrating the deduplication appliances also reduced the backup window by 30 percent with significant cost savings.

“Quantum appliances are an ideal fit for our environment. NFS is used continuously all the way to the backup server, and channel bonding increases the effective bandwidth to 20Gbps—which can be challenging for a LAN with a bandwidth of 4Gbps. A crucial advantage of DXi appliances over products from other manufacturers is variable-length block deduplication. It’s the perfect solution!”

EMIS Electrics GmbH is a medium-sized service provider that has grown continuously over the past two decades. It started out in 1991 as a spin-off of the Vetschau/Lübbenau power plant with 27 employees and two main business areas: power-plant services and facilities engineering. The next milestone in the company’s history was a large-scale project for the Schwarze Pumpe power station in 1995. Eventually, other new sites were established in the vicinity of regional power plants, including Waldkirch and Hamburg in 2005. In 1997, EMIS entered the international market. Due to increasing demand, the company added automation and generator services to its portfolio in 2007. In 2010, EMIS was involved in the construction and modernization of substations and overhead lines. Today, Siemens AG (energy sector, fossil-power generation; instrumentation controls and electrics) has a minority stake in EMIS’ successful business. Together with Siemens, and other partners such as the ABB Group, EMIS Electrics is looking forward to future endeavors.