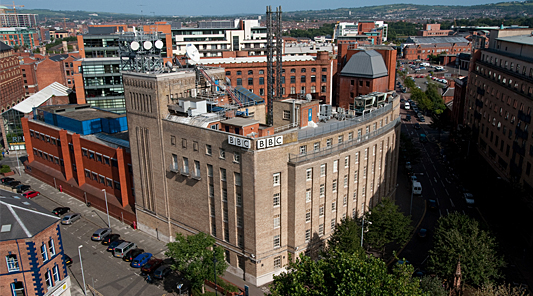 The new system has much faster performance overall, and it provides much more flexibility. Now, we have 200 seats with high performance access to all the shared content through the StorNext File System—so that more editors can work faster and more collaboratively, and spend less time moving themselves or the content around.

“When we converted to an all-digital, file-based capture system,” explains Roland Rodgers, BBC NI’s technology development and infrastructure specialist, “the production team was immediately able to take advantage of the file-based workflow—but we did not anticipate the impact it created on the storage systems and networks.”Dramatically increasing data volumes and more formats needing transcodingthreatened to create bottlenecks. “Frankly, the IT team was surprised at the impact of the change,” Rodgers recalls. “It became obvious that we had to plan carefully and upgrade our systems in a smart way to avoid creating delays for the editors.”

The solution was to overhaul the workflow system, upgrading applicationsand the network as well as storage systems, and expand the existing StorNext environment to include two Fibre Channel–connected locations. As material accumulated, onetape archive was added so that higher-performance disk was only used for current productions. Later, a second archive was added to support long-form current affairs features.Over time, the team added hundreds of terabytes of new disk storage, expanded the SAN, replaced StorNext controllers with higher-performance models, and upgraded drives and media in the archives. “Except for changing the controllers, virtually all of the upgrades were non-disruptive,” Rodgers notes.

“The new system has much faster performance overall,” says Rodgers, “and it provides much more flexibility. Now, we have 200 seats with high-performance access to all the shared content through the StorNext File System—so that more editors can work faster and more collaboratively, and spend less time moving themselves or the content around.” Each of the two Belfast locations has performance disk resources and a StorNext AEL6000 tape library. Rodgers says, “One holds the news proxy files on disk and nearly a petabyte of the Rewind archive while the other one holds all the full-quality content for the news. Dividing the work gives us maximum performance, but the two sites are linked via Fibre Channel. So, in a pinch either one can act as a backup for the other. We have one StorNext File System spanning the entire system, making it easy to share files.”

“As soon as data hits the working disk, StorNext automatically writes two copies—one to each of the LTO libraries,” says Rodgers. “That way, we have a copy of everything stored in two places for backup and DR protection. And when files are no longer actively being worked on, we remove the disk copy to free up space for new content—that helps us save money on disk capacity. StorNext and Cinegy, however, see all the content on disk and tape, so that editors have access to everything.” Editors normally work from proxies on disk,and Cinegyautomatically pulls the full-quality versions from disk or tape.

“News footage is ingested into the disk environment at high speed—where StorNext supports multiple parallel transcoding operations—so the data is made available with minimal delay to the content production teams,” Rodgers explains. “StorNext lets us get the maximum performance out of all our disk resources. “Over the years, we moved from a minimum-sized implementation—one storage node and one library at one location—to a fully redundant, highly resilient, dual-site implementation without significant downtime or disruption to our users. This capability is a strength of StorNext, and the way that it and Cinegy work together.”

The BBC Northern Ireland is a national division of the BBC and the primary public broadcaster in Northern Ireland, providing news, sports, current affairs content, dramatic series, and cultural programming. BBC NI serves Northern Ireland audiences, and it supports the overall mission of the BBC to enrich people’s lives with programs that inform, educate, and entertain. BBC NI distributes original material, and it airs programs developed by other national BBC centers over two television channels, two radio stations, and a broad range of online and new media platforms.