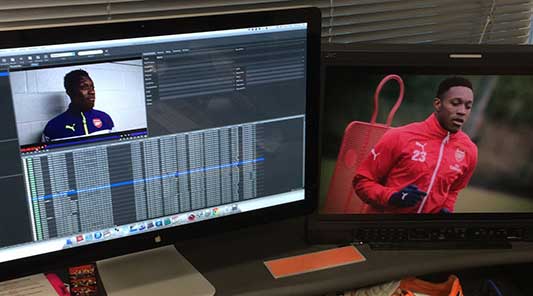 The production team requires fast, easy and reliable access to these assets every day. And that’s where CatDV scores. As we build more and more content, CatDV never forgets – it’s saving us lots of time and money.

With a star-studded squad of players and a brimming trophy cabinet at its 60,000-seat Emirates Stadium in London, Arsenal Football Club is one of the world’s most successful and popular soccer teams – a truly global sporting brand.

Lauded for playing a particularly attractive style of football, the team holds the ongoing record for the longest uninterrupted period in the top-flight of the English Premiere League, and in 2014 the club was named the fifth most valuable association football club in the world, valued at £1.3 billion.

Feeding the appetite of millions of supporters worldwide for all-things-Arsenal, the production unit provides three hours of soccer-based television programming every week, delivered by Arsenal Broadband Ltd, with MP & Silva. This content includes the club’s Premier League, live reserve and academy games, each packaged with Arsenal graphics, plus exclusive interviews with players and staff, footballing news and other themed programming, formatted into two separate 26-minute shows, plus over 100 minutes of match action.

Arsenal Broadband also oversees content delivery to on-demand platforms and online outlets such as Arsenal Player, Facebook, YouTube and iTunes, and produces long-form documentaries, such as The Legends, a DVD and iTunes series release looking back at the stellar careers of Theirry Henry, Dennis Bergkamp and Martin Keown. Along with delivering new content, Arsenal Broadband also holds a large back catalogue of historic games and associated footage dating back over 40 years. The business relies on CatDV’s media asset management system to facilitate a working archive of this entire media for the in-house production team to create fresh programming for the global audience.

Equipment-wise, Arsenal Broadband has everything you’d expect of a modern, file-based broadcast channel – pitch-side cameras, a TV studio for commentators and pundits, and Sony ENG camcorder kits for live post-match and other roving reports. All material is ingested into a central server system, which acts as a central library in the main production office at Highbury House, just a stone's throw from Emirates Stadium. The production team uses Final Cut Pro as the editing software and can load materials as required for editorial from the central library using CatDV.

“Arsenal FC-branded content has allowed the club to expand its fan base way beyond the reach of the Emirates Stadium,” says Petro Mnych, production manager at Arsenal Broadband Ltd. “With this comes a responsibility to deliver not just the games, but also exciting and interesting programming to the fans worldwide. We hold an extensive treasure trove of Arsenal-related material, and this volume expands every week. Obviously, because there are continual demands for fresh programming, the production team requires fast, easy and reliable access to these assets every day. And that’s where CatDV scores. As we build more and more content, CatDV never forgets – it’s saving us lots of time and money.”

The Challenge: Developing a Feasible, Long-term Media Management Strategy
“When I joined in 2008, we had a production staff of just two people, a collection of around 10,000 Digi-beta tapes, plus hard drives, knocking around in cupboards, and no media asset management strategy to speak of. At that time, we had a very outsourced model, in that we did not produce much content, and bought-in relevant content from external suppliers,” explains Mnych.

“However, as part of a wider process, we undertook an 18-month feasibility study into how best to bring production in-house and expand the media offering. One crucial matter that we identified very early was that if you already have a back catalogue and are going to continually shoot and post more material, you’re going to need a proper way to manage and find material in the future. You can do that with a bunch of hard drives, labels, stashed folders and a separate database. But over the longer term, how do you efficiently find material, say in five or ten years, when the staff might have moved on to new jobs elsewhere? And, above all, how can you give your footage new life and new value? We really needed to find an efficient way to keep ourselves organized.”

Solution: CatDV Server With Worker Node and Multiple CatDV Licenses
Mnych says he discovered CatDV during the research period for the proposed overhaul. This involved speaking with London post houses, the BBC Natural History Unit in Bristol, and a week-long visit to NASCAR in Charlotte, North Carolina, whose implementation of CatDV to manage a serious amount of media assets, “made us realise that CatDV was the product for us,” he remarks.

“We understood the fundamental importance of metadata and how it could be used down-the-line to make new programming and bring value to the assets. We heard whispers on the grapevine that that Final Cut Server was nearing end-of-life, and other MAM systems were much less impressive to CatDV, so we dismissed them from our thinking. It was the start of a journey that we have never looked back from.” Today Arsenal Broadband manages its assets using CatDV Server, a Worker Node to automate file-processing, plus 16 CatDV desktop licenses. Its CatDV systems are all Mac-based, and are connected to over 330 TB of EMC Isilon storage, plus an additional 49 slot LTO library, giving the team – producers, editors and cameraman – full and instant access to the ever-growing volume of media assets.

Mnych says a systematic programme of reviewing every library tape, and cherry-picking the best footage from each, helped slim-down the collection to less than 2,500 tapes, and that in excess of 30,000 archive clips have now been carefully logged and tagged using CatDV.

All material is ingested via CatDV, which generates and publishes a low-resolution proxy as well as auto-capturing basic image metadata. To enable easy retrieval the native footage is stored in a series of folders and sub-folders pertaining to the date, match, year and competition. Clips include general default metadata – such as date, match, codec, folder, subfolder and competition – with additional metadata, in the form of keywords, added manually – such as player names, free kicks, penalties and goals.

“If you develop your naming strategy early on, you will reap the rewards later,” says Mnych. “We don’t use a huge selection of keywords, but we have just enough to make searching dynamic, and generally it’s perfectly good enough to find what we want in CatDV.”

In practice, using the keywords the production team search for materials in CatDV, then scrub through proxy footage and assemble the clips they want into playlists, sometimes performing mini-edits. These proxy clips are dragged as required into Final Cut, where the timeline is automatically populated frame-accurately with the original high-resolution media.

Mnych says that the operational speed and ability to customize CatDV are among its main advantages. “As the production team are working with low-resolution proxies generated by CatDV, our bandwidth requirement is low. We often have 15 people on the network at the same time and never have any capacity or bandwidth issues. Once they have selected their media, it’s just a quick and simple drag-and-drop exercise from CatDV to populate Final Cut with the media.”

He continues, “CatDV is very easy to customize and operate, so the team can easily build playlists and perform mini-edits themselves. Additionally, when Arsenal is playing a new opponent, or sign a new player, we can add a new field to a dropdown, plus the relevant keywords, within seconds and these are automatically applied to every client on the system instantly.”

Mnych says CatDV has shown just how fast and cost-effective it is whilst compiling The Legend’s documentaries, from matches and interviews with all the big characters of that period. “We had 40-50% of the footage for these productions already tagged and stored, but without CatDV it would have been a major and expensive problem to find and retrieve the right clips by scrubbing through the original tapes – or to have sourced the footage from external archives.”

Along with CatDV’s performance, Mnych also applauds the growth of Square Box Systems and its product support. “Square Box has expanded considerably as a company, with more staff and many more clients worldwide, with the result that the service is better and the product development has been impressive. That said however, CatDV has proven very reliable. In the four years we used CatDV, we’ve rarely had to call for technical support – it just does what it is meant to do.”

When asked what he would say to anyone else considering their asset management options with CatDV, Mnych says, “Arsenal Football Club is synonymous with quality, both on and off the soccer pitch, and only the highest-quality media asset management will do. Do your homework. Visit companies where there’s a CatDV system installed. Although no two uses of the system are ever the same, you will learn a great deal about how to structure your system, and tailor the metadata to best serve your purposes. CatDV systems do exactly what you expect them to do, they can pretty much be used without any special training, and they have more than paid for themselves.”