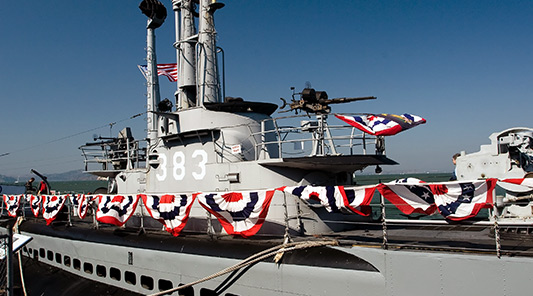 As our access levels have increased, largely due to StorNext, we are finding different ways of looking at the data and putting it to use. If you have a need for shared data storage, there is no product out there that will attain what StorNext does in terms of accessibility and reliability.

When the U.S. Naval Surface Warfare Center’s Carderock Division (NSWCCD) upgraded its underwater sensor array, it required a storage system that could keep up with the 1,000-fold increase in data. NSWCCD stayed with Quantum’s StorNext data management software. The result: A scalable, reliable solution that significantly increased performance.

Among its many research activities for the U.S. Navy, NSWCCD manages two advanced underwater sensor arrays from an Alaskan laboratory. These arrays collect the acoustic signatures of submarines, both at sea and when the submarine is stationary. This information is used to assess vulnerabilities and develop quieting measures.

When NSWCCD deployed new sensor arrays, each containing hundreds of underwater microphones, they increased data collection by a factor of 1,000, with an average of 550,000 data files and up to 3TB of data per test. All of that data needed to be accurately captured and stored during the three to twenty minutes that a test takes. If a problem was found with the data quality, tests could be rerun, but only at the significant additional cost of recalling submarines or delaying their departure.

A SAN installed in 2005 that utilized an earlier version of Quantum’s StorNext File System initially met the organization’s needs. With the new volume of data, NSWCCD’s computer scientist Bryan Bennett went looking for a high-speed, high-availability storage system. The best choice, he quickly realized, was to upgrade StorNext.

NSWCCD is now able to process more data than before with a newly architected storage system in place that consists of three StorNext file systems. StorNext’s high-speed file sharing and scalable SAN performance enable the analysis of rich, detailed information generated by the sensors.

With the first file system focused on high-speed data ingest, the second file system provides consolidation and analysis of data. In the previous system architecture, everything was written to a single partition, which became slower and less reliable as the file system filled up. Finally, because only processed data is stored in the third file system, the raw data remains unaltered in the second file system for future analysis. The benefits of this setup were evident when the system operated flawlessly for NSWCCD’s largest test ever.

“We were amazed when we realized that we could take in 50 percent more data than we normally do in a day,” says Bennett. “A faster ingest data rate coupled with a robust data management system enables us to run tests more quickly and get the ships back out to sea in a timely manner. The performance gains from StorNext have really impressed management.”