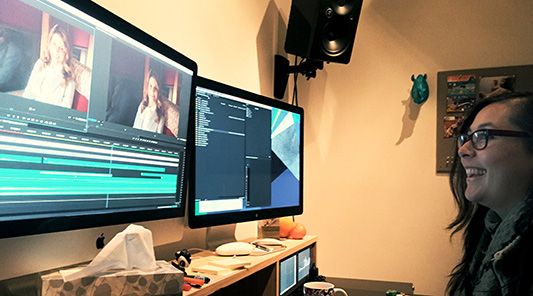 We have an essentially unlimited archive capacity that lets us bring back assets much faster than before—at disk speed. We’ve eliminated backup but have much better protection—there are always at least two copies of the assets, and we have full site loss protection.

“Our work has seen a dramatic upswing in the last few years,” explains Burns. “In 2013 we produced 29 movies. By 2015 we almost doubled that to 56. The schedule for 2016 calls for 78. We realized nearly two years ago that our existing storage systems could not support that kind of growth.”

“About two years ago, because we had to double our online storage and had so much data that couldn’t be managed easily, we decided then it was time to look for another kind of solution,” says Burns. “The strain created by so much more new content meant that we were continually buying new online disk storage, managing larger tape archives that were hard to access, and not protecting content as well as we should. It was unacceptable.”

Object storage repositories use object storage to hold up to hundreds of petabytes, spreading the data across a large number of disk resources and distributing it geographically. The environment is self-healing and more scalable and resilient than RAID. The Crown Media object storage configuration began with 500TB of usable capacity, spread between Los Angeles and Denver and configured for full site loss protection.

In the new system, ingested content is immediately copied to object storage and replicated from California to Colorado.

“This initial backup step is very important for us,” says Burns. “It gives us two copies in different sites immediately, so we get much higher levels of protection than we had before. Best of all, the process is automatic, which reduces the load on our IT guys—it completely eliminates the overhead and delays of a separate backup process.”

Inactive content is removed from the online storage, leaving only theobject storage copies. The editors, however, see all the assets through StorNext and Reach Engine, making retrieving files transparent.

“When files are stored in the object storage archive, editors get them back almost instantaneously, much faster than before. That’s important for us, because we pull content out of the archive literally every day. And we see everything through Reach Engine so we have a single point of management and control for all workflow assets.”

“With Quantum’s object storage, we have an essentially unlimited archive capacity that lets us bring back assets much faster than before—at disk speed.” says Burns. “We’ve eliminated backup but have much better protection—there are always at least two copies of the assets, giving us full site loss protection. We've truly simplified operation and centralized administration using Reach Engine and StorNext.”

“When we started this project, many of us thought that it looked like overkill—that we’d need a couple of years to grow into it. But a year later, we realize that we’d be dead without it—we wouldn’t be able to function—and we’re in the process of doubling the capacity. It’s been invaluable in increasing the efficiency of our workflow, from ingest to edit to delivery and re-use.”

Crown Media Holdings, Inc. is the corporate parent for the portfolio of cable networks and related businesses under Crown Media Family Networks. The company currently operates and distributes Hallmark Channel in both high definition (HD) and standard definition (SD) to 90 million subscribers in the U.S. Hallmark Channel is the nation’s leading destination for quality family programming with an ambitious slate of TV movies and specials; original scripted series, including Cedar Cove, When Calls the Heart, and Good Witch; as well as some of television’s most beloved sitcoms and series. Hallmark Channel is also home to the annual holiday franchise, Countdown to Christmas, featuring a lineup of 24/7 holiday programming. Hallmark Channel’s sibling network, Hallmark Movies & Mysteries, is available in 62 million homes in HD and SD and is one of America’s fastest-growing cable networks. Hallmark Movies & Mysteries features a unique mix of original movies and acquired series focusing on the lighter side of the suspense and mystery genres. The network is also home to the annual holiday franchise, The Most Wonderful Movies of Christmas, as well as presentations from the award-winning Hallmark Hall of Fame library. In addition, Crown Media Family Networks includes the online offerings of HallmarkChannel.com and HallmarkMoviesandMysteries.com.