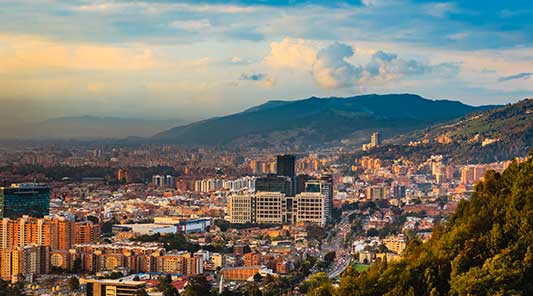 With this new scalable edge computing solution, the city’s security team can view any camera, regardless of brand across the city from a single location, which will greatly simplify operations.

In 2016, the security team responsible for citizen and visitor safety in Bogotá was operating with a jumble of technology from 14 contracts signed and implemented over many years. The city had 2,000 cameras, well below the international standard for cameras per capita. Of those 2,000 cameras, only 1,500 were operational; some were obsolete, some had been vandalized, and some were simply out of order. Many of the cameras, from brands such as Pelco, Bosch, Indigo and others, operated as islands, with no centralized monitoring or management. The city realized they needed to upgrade to an infrastructure platform with mission-critical capabilities purpose built for the demands of Safe City and Internet of Things (IoT) initiatives. Specifically, they needed a platform that offered resiliency and the ability for a security operator in any location to view any camera throughout the city. The platform also needed the ability to scale up from today’s 2,000 cameras to support, manage and view feeds from 5,000 cameras spread across 18 different boroughs.

Protecting the City Boroughs with Resilient, High-Performance Infrastructure
The city selected Quantum VS-HCI, built with 30 Lenovo servers and 20 storage-only appliances running Pivot 3’s Acuity software platform. The first phase of the implementation includes 5 PBs of capacity for the city’s central administration, with an additional 10 PBs scheduled for the second and third phases to support the city’s 18 boroughs. Space, power, and cooling requirements per PB were from 20 to 40 percent more efficient than competitive solutions.

Protecting the Future with Support for Additional Applications and Simplified Scalability
In addition to traditional video surveillance, the VS-HCI infrastructure will support analytics and other security software. The solution’s virtual environment gave the city the flexibility to support any OS required for the selected analytics and security software. The VS-HCI solution will be integrated with the Bogotá telephone company’s fiber networks across the city. The Quantum VS-HCI solution provides enterprise-grade infrastructure for large-scale surveillance for Bogota and its boroughs. The infrastructure is managed from a central location, greatly simplifying management, and increasing the city’s situational awareness and ability to monitor and respond to an incident. The solution can scale out processing and storage capacity simultaneously with each added appliance, or scale storage capacity independently as needed, as camera counts grow.

The solution will also provide significant benefits to the police department, as well as the citizens and visitors that rely on police services. Over time, police response times will be improved by the ability to dispatch directions to incidents within the boundaries of the affected borough. Virtualized client workstations to be deployed during a second phase of the project will arm police with live video of an incident on a mobile device, dramatically improving police safety and increasing effectiveness of their response.

About City of Bogota, Colombia

At an elevation of over 8,500 feet and over 8 million inhabitants, Bogotá is the capital and largest city of Colombia and the thriving political, economic, arts, and sports center of the country. It’s a diverse and multicultural blend of residents spread across 20 localities, or boroughs, forming an extensive network of neighborhoods with a mix of colonial and modern architecture. Known as the Heart of the Andes, Bogotá is responsible for over half of the tourism in Colombia.