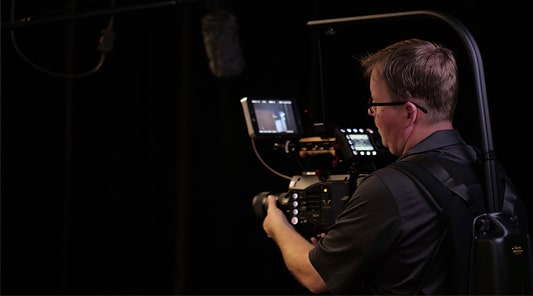 With our new cameras, we are now streaming multiple 4K streams into StorNext and doing production work at the same time, and the system doesn’t ever slow down.

Kansas State University’s College of Education prepares more classroom teachers than any other institution in the state, and it has been a trailblazer in using media technology. All of the school’s students are taught how to use digital resources, and the institution’s own media center, the Catalyst, does everything from burning DVDs to creating full-length documentaries.

“The College of Education has had a full-time videographer for years,” explains Matthew Heinrich, the Catalyst’s network administrator. “That person works with advanced media students to create a remarkably wide range of materials, and because they include both instructional support content and public-facing documentaries, we have made it a priority to stay current with production tools and techniques.”

Early on, the IT team standardized on the Mac platform, brought in professional-grade production tools, and began creating content in 4K. “We recognize that we are creating content not just for use today, but for extended future use. When we send a team to Tanzania or Ecuador, as we did for recent documentary projects, we want that content to remain available for reuse for decades and beyond.”

“Workflow efficiency is very important to us because we normally have multiple editors working on the same project at once,” says Heinrich. “Apple Xsan provided that shared environment initially, but when Apple changed its emphasis away from Xsan, we decided to move to a new future-proof workflow platform.”

In the search for a new solution, the team’s priorities were clear: high-performance shared workflow for high-resolution work, keeping costs as low as possible, a supplier committed for the long haul, and continuity with existing tools, processes, and resources. “With several vendors that we considered, we would have had to replace all of our existing storage, something that would have driven costs way up,” says Heinrich.

Ultimately, the team decided to upgrade to Quantum StorNext. As Heinrich explains, “StorNext supports the highest performance Fibre Channel connectivity as well as LAN-based NAS storage. It allowed us to keep our existing storage that we already had installed, which gave it a substantial cost advantage, and is completely compatible with Xsan.” The StorNext system’s status as a worldwide standard across media production companies, television networks, and motion picture studios gave the team confidence in Quantum’s long-term commitment to the market. “StorNext was the only solution we saw that could meet all of our needs,” says Heinrich.

Heinrich did the installation himself, using materials that Quantum provided and talking to the company’s service staff. He installed StorNext Xcellis storage appliances on a Thursday, and went live over the weekend. “The transition from Xsan to StorNext was incredibly smooth,” says Heinrich. “We were up and running on Monday morning, all the content was there for the editors, and all the tools and processes looked just the same. The only changes were the volume names.”

StorNext handles whatever jobs the Catalyst team throws at it. “With our new cameras, we are now streaming multiple 4K streams into StorNext and doing production work at the same time, and the system doesn’t ever slow down,” says Heinrich. In addition, the system reliability has been perfect. “We haven’t needed a single service call since we did the installation—it is great.”

In addition to providing high-performance workflow, StorNext supports Windows as well as Apple platforms, which allows the team to use Commvault to back up its completed content and work in progress. Heinrich says, “It has really automated the process and given us an additional level of protection.”

“We are also pleased at the flexibility of StorNext,” adds Heinrich. “We’re talking about adding a layer of SSD in the future, creating a separate disk archive, and potentially using the cloud—all of which StorNext supports.”

The College of Education at Kansas State University is the leading preparer of teachers in the state of Kansas, with a dedication to preparing educators to be knowledgeable, ethical, caring decision-makers for a diverse and changing world. The college’s mission is to deliver exemplary graduate and undergraduate education; to produce, interpret, and disseminate useful research and scholarship; to provide leadership, collaboration, and service within the profession; and to promote and celebrate diversity.