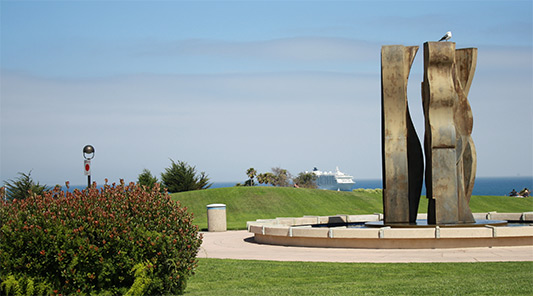 Restoring files inside VMs used to be delayed by at least one day and take hours of my time. Now, with vmPRO and the DXi, it just takes me a few minutes once I’ve found the file I want—it’s great.

Protecting the fast-growing student and administrative data for Santa Barbara City College became more complex and expensive as the IT staff used VMware to virtualize their servers.

“We virtualized as much of our server infrastructure as we could,” explains Brandon Lovelace, network administrator, “but the more we virtualized… the harder the backup got and the more problems we had.”

The IT team started out using VMware Consolidated Backup (VCB) but needed to customize the environment to get the data protected. “It was a mess,” Lovelace says. “We wrote scripts, spooled data to disk, and then used NetBackup to send that data to tape… It was way too complex.” Full weekly backups were taking two to three days to complete, much too slow for daily incrementals, and restores were a major bottleneck. “If a lost file had already been moved to off-site storage, there was an automatic delay of 24 hours while we retrieved the tapes, and it could take hours to restore the VM,” Lovelace reports.

“We talked to our all of our current providers and everybody else we could think of to find a solution,” says Lovelace. Finally, the College selected two Quantum products: vmPRO data protection software and two DXi deduplication appliances. “The Quantum system had all the features we wanted, it was the most cost-effective solution we saw, and we had confidence in Quantum as a supplier that understood backup, and was in the business for the long haul,” says Lovelace.

“Those two- to three-day long weekly backups now all finish in 4 to 6 hours—so we’ve seen a 90% reduction in our backup window,” reports Lovelace. “And the vmPRO software tracks and snaps just the changed blocks, letting us do daily incrementals for everything. It’s the way VMs should be backed up.”

With the DXi’s patented variable-length deduplication, a full six-month cycle of backup data can be retained on disk cost-effectively enough for the College’s tight budget. Off-site protection is also handled more efficiently; each day the primary DXi automatically replicates all the backup changes to the second unit.

Further, because vmPRO creates copies of VMs in their native format, the new system provides much faster file-level access. The IT team can restore or boot VMs quickly without using a separate backup application.

“Restoring files inside VMs used to be delayed by at least one day and take hours of my time. Now, with vmPRO and the DXi, it just takes me a few minutes once I’ve found the file I want—it’s great,” says Lovelace. “With this kind of backup and restore performance, when we get to our goal of 100% virtualization, vmPRO will be the only backup software we need.”

Named the #1 community college in the nation in 2013 by the Aspen Institute, Santa Barbara City College is a comprehensive educational institution serving the south coast of Santa Barbara County. Established in 1909, the college has a wide range of associate degree and certificate programs, as well as transfer programs that provide the first two years of study toward the baccalaureate degree. Students are attracted to SBCC by virtue of its outstanding faculty, small classes, state-of-the-art facilities, student support services and incredible location.