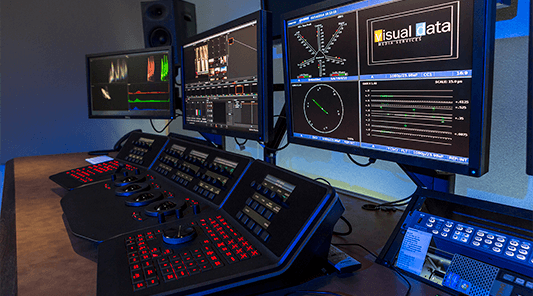 The Xcellis scalability was also a real advantage for us. It let us add performance and storage capacity independently—which means we’ll be able to grow to meet future demands while avoiding forklift upgrades.

A premier international content preparation, localization, post-production and distribution company needed a new storage solution to keep up with 4K work and launch a new, AI-based content-restoration service. After an industry-wide search, the clear winner was Quantum’s Xcellis® Scale-out NAS, built on the StorNext® platform. It provided cost-effective scaling for performance and capacity, strong security features and superb support.

Visual Data Media Services is an innovative content preparation, localization, and post-production company with branches in London and Los Angeles that has carved out an enviably successful position in a highly competitive field by matching their technical capabilities to the needs of a fast-changing market in a careful, incremental way.

"Our goal has always been to provide the most responsive service for our clients at a cost that keeps all of us competitive,” explains Steve Spear, Visual Data Senior VP of Operations. “We only change technology when it is necessary and when we are certain that we have made the best possible decision for both workflow efficiency and economics.”

UPGRADING TECHNOLOGY INFRASTRUCTURE NEEDED FOR 4K WORKFLOWS
The company has been providing its services successfully since 1995, but in 2017 it was clear that a major infrastructure improvement was needed. “We started to see a huge increase in 4K and UHD projects, and our old system just couldn’t keep up,” explains Ken Spickler, Visual Data Director of Engineering. “Whenever we had to process uncompressed 4K files, the existing NAS infrastructure was just too slow to handle more than one job at a time.” The team got the work out, but managing around the bottleneck was a major problem, so Visual Data looked for a solution that could double capacity and deliver the performance to support multiple 4K and UHD operations at the same time.

MATCH-BACK PROBLEM CREATES NEW OPPORTUNITY
“Just as important to us as upgrading to 4K workflow was giving us a way to take advantage of a major new opportunity to solve the problem of re-mastering existing content faster and more efficiently,” Spear says. During the 1990s and early 2000s, when the first non-linear editing systems were used for episodic TV and direct-to-video motion pictures, work was shot on film initially, but production teams edited and finished on standard-definition video, eliminating the need to create a cut negative of the final version.

“That new workflow made everything faster and less expensive,” Spear explains, “but it created a major nightmare when content owners wanted to distribute their SD content in HD or 4K.” With no cut negative to scan, the only way to get old features to 4K is to perform a match-back—scanning the original dailies and eye matching against the finished SD element in order to conform the content.

“We are starting to revolutionize the restoration process of library and archived content,” Spear said. “What used to take many weeks now gets done in a few hours—and the process is much more economical. But to make it work, we needed a storage and processing environment to take advantage of our new capability.” The plan was to buy high-performance storage to support both our traditional core business and our new Matchmaker business. The question was, which technology to use.

QUANTUM XCELLIS AND STORNEXT SOLUTION TOPS LIST
“We started by looking at everybody in this market—easily 10 vendors—but quickly narrowed it down to three,” Spickler explains, “and built out systems to test what they could really do.” The final choice was decided based on a combination of factors: performance, scalability, security, manageability, technical support and cost effectiveness. “We ultimately wanted a vendor who could perform technically, and would think and act like a collaborator with us. The clear choice was Quantum.”

4K WORKFLOW FOR MULTIPLE OPERATIONS
“On the performance side, our tests showed that the Quantum system did everything that we needed and more,” Spear says. “With StorNext-powered Xcellis, we were able to run 4K scanning, UHD transcoding and a 4K playback all simultaneously, and everything worked perfectly without a single dropped frame! We even got a higher frame-per-second rate on the Scanity scanner than their spec. It was awesome.”

EXEMPLARY SUPPORT, LOWEST OVERALL COST
Service and support were important to Visual Data because the company has what it describes as a modest-sized operation—with 35 to 40 client workstations—and a goal to keep IT overhead low. “We knew that Quantum was a big player used by all the major studios, and needed to be sure we wouldn’t be overlooked,” Spickler says. The experience, as it turned out, was nothing but positive both from Quantum and Diversified. “At one point, we called with an issue and had two guys there within an hour, bringing their lunch with them. They worked right alongside us and got everything resolved that afternoon.”

On overall economics, the Quantum solution was also the clear leader. “Quantum’s cost-per-TB beat everybody,” Spear says, “and the system’s flexibility will help us keep costs low going forward.”

With plans to leverage cloud storage in the future, Quantum’s approach to the cloud was also an advantage. “We like the fact that Quantum gives us the most choices,” Spear says. “Quantum supports third-party commercial cloud offerings, and the StorNext file system lets users see all the content, no matter where it is, through one interface—a really great feature.”

If you can imagine it, we can engineer it. What we do is art. Diversified offers artfully designed and comprehensive managed network and media technology solutions to serve a wide range of diverse markets. If your company can visualize the media integration scenario to perfectly fit your needs, odds are, we can create that masterpiece.