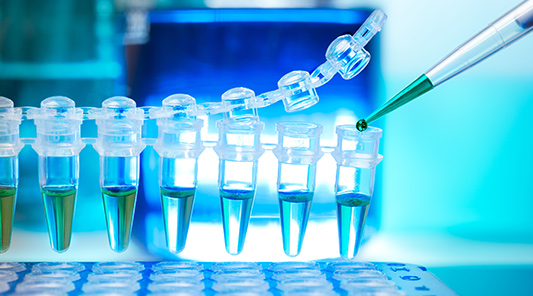 Quantum’s vmPRO makes it easy to find and grab needed files even when you don’t have much training, allowing our remote IT staff to handle restores without local support.

The rapid expansion of a global biopharmaceutical company meant data protection requirements were outstripping available capacity. The company moved to an all-Quantum solution featuring disk, tape, and software for both physical and virtual environments. The result: Dramatic cost savings, faster backup and restore, and a scalable infrastructure that keeps it ahead of growth.

Based in the U.S., this leading biopharmaceutical company has offices in North America, Europe, and Asia. The company’s dramatically increasing data storage requirements were stretching the organization’s limited IT resources and aging tape infrastructure to the breaking point. Complicating matters were legal requirements to retain copies of data indefinitely.

As a result, the company was running backups at multiple locations 24/7. In addition, because tapes were shipped offsite and never reused, costs were going through the roof. At one point, the company was spending more than $10,000 per month just on tapes. Also, restores were a problem, often taking at least a week to complete.

“Eventually I found myself spending six hours a day triaging file recoveries, swapping tapes, babysitting failed backups, etc.,” says a company IT administrator. “There was almost no time to do anything else.”

On, Off, On-Again with Quantum

To address these backup challenges, the company decided it needed a disk-based solution. After evaluating vendors, the company settled on a Quantum DXi® appliance.

“The DXi appliance cut our backup times in half, and restores were almost immediate,” he says. “At the same time, we bought a Quantum Scalar® i500 library to consolidate our tape storage, and between the two we drastically cut our tape costs and backup administration.”

However, the company at a later point tried what appeared to be a cheaper, software-only deduplication alternative. The results were disastrous.

“I think we had a support ticket open continuously for almost a year,” reports the IT spokesman. “We had major, major issues and realized that we should have stuck with the DXi solution—it just worked for us and clearly provided much greater value.”

When the company returned to Quantum, it took advantage of the breadth of Quantum’s portfolio, purchasing a 50TB DXi8500 for its main production center, a 56TB DXi appliance for disaster recovery, and multiple 8TB and 16TB DXi appliances for data protection at smaller remote sites worldwide.

The DXi-Series’ high performance and powerful deduplication have been a huge boon for the company, keeping backup windows manageable even as its data has grown to over 65TB—up more than 400 percent in three years. With DXi deduplication ratios as high as 99.1 percent, the IT staff has also been able to keep much of the data archived for years on the DXi systems. As a result, tape consumption is down by a factor of ten, saving $100,000 annually. In addition, restores are nearly instantaneous.