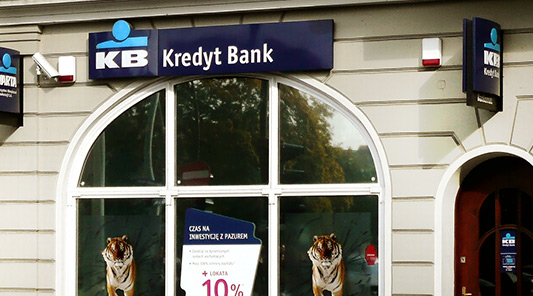 It is a reliable technology – very robust. Quantum is the main pillar of our bank data safety.

Fast growth and rigorous regulations have put constant pressure on Kredyt Bank to find new and better ways to safeguard data. In 2005, the bank chose to consolidate its backup systems—and over the years since, it stuck with trusted technology. The result: A long record of flawless performance by Quantum equipment and a recent upgrade to Quantum’s Scalar i6000 functionality.

As one of Poland’s largest banks, Kredyt Bank is responsible for data from customers all over the country. At one point, each local bank office backed up its own data, first on individual tape drives and later on tape libraries.

However, rapid growth in new accounts, an increase in financial services offered by the bank, and the growing popularity of electronic banking led to a tremendous increase in data. At the same time, government regulations were expanding the need for greater data security and longer data retention—in some cases, up to 25 years.

The technology team decided to consolidate Kredyt Bank’s tape backup infrastructure by placing an enterprise-class tape library in the main data center and another in the backup data center.

“We realized we could not have many separate systems, with many single tape drives,” says Piotr Rochala, manager of Kredyt Bank’s Storage and Backup Department. “We decided we needed a professional solution that would allow us to automate our backup process across the company and eliminate the risk of human error.”

In 2005, Kredyt Bank began with two Scalar tape libraries equipped with four LTO-3 drives. One factor driving the decision was Scalar’s compatibility with the backup software the bank was using. Other factors included the ease of scalability, the highly competitive cost, the reduced administrative time that came with system consolidation, and the ability to meet government data retention requirements.

“Thanks to Quantum’s tape libraries, we are able to fulfill the requirements of the law as well as our internal bank standards,” Rochala says. “During the years we have had Quantum libraries, we have not had any problems with data recovery.”

The solid performance of the Scalar solution and its easy scalability resulted in a decision to stay with the technology as the bank’s needs changed and data amounts grew. By 2009, the technology team had expanded the system and switched to LTO-4 drives. More recently, the bank upgraded to Scalar i6000 functionality through a firmware update.

Kredyt Bank is a financial services company that connects innovation with a tradition of solid banking. As one of the top 10 banks in Poland, it serves individual customers and businesses with a full range of high-quality products and financial services tailored to each group’s needs.