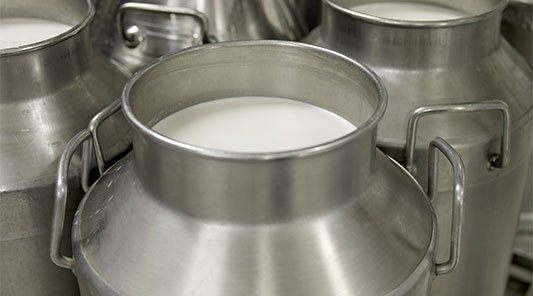 Because the DXi does all of its work in-line, the systems are much smaller than the Exagrid systems—we needed a 48-TB Exagrid unit for the main location while only 11 TB for the DXi, and far fewer spindles. For our remote site, the DXi required no physical appliance at all—we just used the local VMware environment and built the virtual appliance on it.

Faced with skyrocketing data growth and malware threats, a leading French dairy cooperative carried out a proof-of-concept test to choose the best deduplication appliance for their Veeam software. The results were clear—Quantum’s DXi® deduplication and replication was more than 15 times more effective than the competition, providing the right solution for all of the company’s offices.

Maîtres Laitiers du Cotentin (MLC) is a premier French dairy cooperative with 820 local farms. Each year, it collects and processes more than 400 million liters of milk, and distributes fresh milk, crème fraiche, butter and cheese to outlets throughout France, the EU and, more recently, to China with their new factory in Méautis.

MLC relies on robust data management and IT services to keep track of inventory, monitor production and manage all of its complex business operations, including payroll, HR and the service activities of the subsidiaries for distribution. “In some ways, Maîtres Laitiers du Cotentin today is just as much a data processing company as a dairy operation—the two parts of the business are fully intertwined and interdependent,” explains Emmanuel Moncuit, the company’s System and Network Administrator.

Since 2010, approximately 98% of the company’s 120+ servers have been virtualized, a strategy with major implications for backup and data protection. It meant that most of the backup duties were carried out by Veeam software, writing data directly to disk volumes, with only a couple of physical servers still protected by the company’s legacy backup application.

Initially, the strategy worked; but as data volumes ballooned at roughly 25% each year, the systems began to fall behind. “We had so much data that we began to shorten our backup retention time, and providing secondary-site, DR protection was extremely difficult because we had too much data to replicate over our network,” Moncuit remembers.

On top of those problems, the team members started to see ransomware attacks against their business. Their backups protected them, but they decided it was time to upgrade their system. “We wanted to be able to create a full backup whenever we wanted in order to have high confidence that we could recover cleanly and quickly, something that the ransomware attacks had forced us to do,” Moncuit explains. “So, we decided to stay with Veeam.”

The question of backup hardware was more complex, however. The team decided that the best approach was likely to be deduplication appliances. “We determined that using deduplication should let us store more data on less disk so we could have a longer retention period, and we wanted it to allow us to replicate backup sets between data centers,” Moncuit explains.

The team only found two deduplication appliances certified by Veeam for that level of integration: Exagrid and Quantum DXi. “We heard lots of claims about what each would do but decided that the only way for us to find out how the systems really worked with our data and networks was to set up a real-world test of the hardware.

The project compared two different approaches to deduplicating the data sent by the Veeam software. Units from Exagrid use post-processing deduplication, in which the data is first written directly to the disk and held in reserve in its original size. The DXi appliances use an in-line approach. They deduplicate the data in real time during the backup, eliminating duplicate blocks on the fly, and only storing the reduced data set on disk.

The two appliances also use a different method to deduplicate data. Exagrid systems divide the stored backup files into what the company calls “zones”, and then do a byte-level comparison between zones in the new and the old files. The DXi systems look at blocks in the active backup, comparing them with blocks already in the stored backup files using dynamically variable block sizes to maximize data reduction.

Each test included two units which processed the same succession of backup and replication events. The Exagrid used a 42-TB unit in one section of one data center, and a second 20-TB unit in a different area, connected over the company LAN to test replication. The DXi system set up one 11-TB physical appliance in the first data center and, to test replication, installed a virtual appliance in a second, remote data center, connected to the first by a WAN. “We really wanted to be sure that we did everything we could to have both systems following all of the recommended best practices,” Moncuit says.

The tests revealed several advantages that made the DXi system the clear winner. “The larger Exagrid units store one whole backup in native mode to make reads and writes faster, so we were surprised to see that the performance of the much smaller DXis was just as good,” Moncuit says.

But the DXi deduplication results were much more effective, providing striking benefits, including size of units required and replication effectiveness. “For our remote site, the DXi required no physical appliance at all—we just used the local VMware environment and built the virtual appliance on it,” Moncuit explains.

For deduplication, the DXis provided over 300% better results than Exagrid or the backup software’s own deduplication for the primary backup jobs. That advantage was greatly magnified when it came to replication because the DXi system leveraged its global deduplication. “In our tests, the DXi replication was finished just a few minutes after the backup was finished, so our period of risk—the gap between when a backup is done and a copy is safely off site—was incredibly short,” Moncuit adds.

More than Ten Times as Effective, Without Requiring a Physical Appliance

When both units replicated new data from a 224-GB backup at one location to an appliance at the other, the Exagrid system sent 21.7 GB of data—a 10:1 reduction—while the DXi’s virtual appliance sent only 1.4 GB—a 159:1 deduplication rate. “The difference between the units—more than order of magnitude—was amazing to us, and it made our decision in favor of the DXi system an easy one,” Moncuit explains.

Production Environment Results Even Better than the Tests

Based on the testing, the team installed the DXi units in the production environment and was pleased to discover that the results in the real environment were even better than they had hoped for. “In our trial, the DXi was as fast as the Exagrid units, much smaller, and gave us over ten times better deduplication results,” Moncuit says, “but production results were even better than the tests.

“Thanks to the combination of DXi appliances and Veeam software, we are backing up more data in less time, replicating backups over our existing WAN, able to restore files quickly, and have DR protection that safeguards our data from ransomware attacks.”

Located in France, the parent company of the group Maîtres Laitiers du Cotentin is a premium French dairy cooperative with a turnover 320 million EUROS, gathering more than 1,200 members disseminated in 800 separate local farms which collects, processes and distributes more than 400 million liters of milk a year. A leading ultra-fresh milk supplier to the private-label market and food services, the company creates a wide range of products including its specialties, crème fraiche and Normandy cream. Launched on January 1, 2016, “Campagne de France” is the new brand owner by the cooperative’s producers who defends the French Milk sector for production and transformation. After the EU, the cooperative MLC is focusing on international growth, in particular in China through a new factory in Méautis that produces baby milk.

For 30 years, the MLC group has been developing its distribution system “France Frais”, which represents hundreds of companies across the nation. The group expands its industrial activity by acquiring the companies REO (camembert from raw milk) and YEO (organic yogurt). The group stands at 1.8 billion EUR (approx. 2.1 billion USD) with 4,000+ employees.