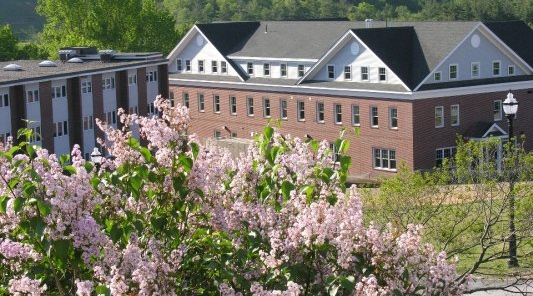 We used to spend an entire day of work each week just tending to the backup and this new solution has reduced that time to almost nothing. In fact, it proactively tells me that everything is happy, so now my team can rest easy and concentrate on new projects...All thanks to Quantum.

After Franklin Pierce University’s IT team decided to replace its legacy backup infrastructure, the team received an education in the benefits provided by Quantum’s DXi® deduplication appliances – so they adopted the DXi solution. The result: Backup performance doubled, restore times were cut from hours to minutes, and management time was reduced by nearly 20 percent.

Thomas Rup, Senior Systems Administrator for Franklin Pierce, says he recognized the need to replace the University’s backup system on the day he joined the IT Department. With multiple campuses, dozens of servers, and a range of mission-critical applications, the New Hampshire-based liberal arts school needed a solid IT backup infrastructure to support its 350 faculty and 2,500 students. But the existing backup system was barely hanging on.

“We were babysitting the backup on a nightly basis,” says Rup. “Spending 6 to 8 hours a week swapping tapes and responding to failures is a resource killer for a small IT team. The old system wasn’t keeping up with our growing data—the backups were taking so long that some applications didn’t have a sufficient window for completion.”

With a limited budget, Rup reviewed backup options from different companies. He zeroed in on server-to-disk-to-tape as the right approach. Rup quickly saw two key opportunities in Quantum’s DXi-Series backup and deduplication appliances. The first was speed and accessibility for both data backup and restore. The second was how Quantum’s deduplication technology could elegantly integrate with tape backup to address both near-term storage and offsite archiving. Rup decided on two 4TB DXi4000 Series appliances in the University’s main data center and a Quantum Scalar® i40 tape library at a remote facility.

The University uses the DXi systems for onsite incremental and weekly backups to disk. Then the disk image is periodically backed up to the tape library for compliance with state and federal regulations on long-term retention. With the DXi systems in place, Franklin Pierce is seeing a 50 percent reduction in backup times across the board, with previous 11-hour incremental backups now taking 5 to 6 hours, and 48-hour full backups cut to 24 hours.

Restores have also been dramatically simplified. In most cases data still resides on the DXi appliances, making a restore seamless and almost instantaneous. On those rare instances where a file needs to be pulled from a tape backup, Rup says it’s a simple five-minute process to “remote in” to the server, locate the file and set the tape library to restore it. The biggest benefit by far has been improvement in productivity, resulting in peace of mind for the IT team, according to Rup.

“We used to spend an entire day of work each week just tending to the backup, and this new solution has reduced that time to almost nothing,” he says. “In fact, it proactively tells me that everything is happy, so now my team can rest easy and concentrate on new projects. That’s more than two months per year of IT time we’ve recaptured, all thanks to Quantum.”

Founded in 1962, Franklin Pierce is a private university that combines a liberal arts foundation with coursework for professional preparation. The University consists of the College at Rindge and the College of Graduate and Professional Studies. The institutional mission focuses on preparing citizens and leaders of conscience for a new century who make significant contributions to their professions and communities, whether their aspirations are global or local.